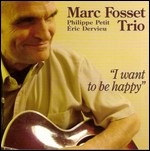 Marc Fosset was born in Paris. He learned to play guitar left-handed after seeing Yves Montand and Didi Duprat perform, and was also influenced by Django Reinhardt's style. With Michel Devillers, Fossett began accompanying jazz and blues musicians in the "Trois Mailletz" club in Paris. He joined the Magma ensemble, played with René Urtreger and Claude Guilhot, and in 1976 he founded a trio with Franco Manzecchi and Patrice Galas. In 1977 he formed a duo with Patrice Caratini. In the 1980s and 1990s, he toured with Stephane Grappelli.[1] Fosset often performs in a duo with Jean-Michel Cazorla, and as a trio with Laurent and Philippe Briand.[2] He tours internationally and maintains an extensive discography.[3]

This article uses material from the article Marc Fosset from the free encyclopedia Wikipedia and it is licensed under the GNU Free Documentation License.