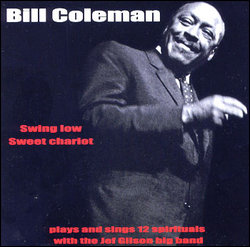 In 1909 Coleman's family moved from Kentucky to Cincinnati. His first musical explorations were on clarinet and C melody saxophone, but he eventually settled on trumpet. As a young man he worked as a messenger for the Western Union telegraph company. He studied with Cincinnati trumpeter Theodore Carpenter, and played in an amateur band led by trombonist J.C. Higginbotham.

Coleman began professional work in Cincinnati with bands led by Clarence Paige and Wesley Helvey (both bands his teacher Carpenter worked in) then with Lloyd and Cecil Scott. In December 1927 he traveled with the Scott brothers to New York City, and continued to work with them until the late summer of 1929, when he joined the orchestra of pianist Luis Russell. His first recording session was with Russell on September 6, 1929, and he soloed on the tune "Feelin' the Spirit". By December 1929 he had left Russell (partly due to the majority of the solo work going to section mate Henry "Red" Allen), but would rejoin the band on two more occasions during 1931–32.[1]

He rejoined the Scott brothers (then known as Cecil Scott's Bright Boys) in late 1929, participating in a Victor recording session, and continued to work with them through the early part of 1930. He worked with various New York based bands until rejoining Luis Russell in 1931.[1]

His first trip to Europe was with the band of Lucky Millinder from June until October 1933, after which he returned to New York to work with bandleaders Benny Carter and [(Teddy Hill)], whom he recorded with in early 1935. While with the Hill band he participated in a freelance recording session with pianist Fats Waller, waxing a number of sides.[1]

Coleman returned to Cincinnati briefly in the summer of 1935, then headed to Europe, playing a residency in Paris with entertainer/vocalist Freddy Taylor (whom he had worked with in the Lucky Millinder band). While in Paris he recorded with guitarist Django Reinhardt and made several freelance sessions under his own name. In late 1936 he traveled to Bombay, India, playing with Leon Abbey's Orchestra,[2] then back to Paris in April 1937, joining the band led by American-born saxophonist William T. Lewis (the band known as Willie Lewis and his Entertainers).[1]

He returned to France in 1948 and spent the rest of his life there in part due to racial segregation.[3] Like many American musicians, he felt he received the recognition he deserved from European audiences, and during the decades he lived in France he traveled and performed in clubs and concert venues all over Europe. In 1978, he performed at the first Jazz in Marciac festival (along with tenor saxophonist Guy Lafitte), later becoming an honorary president of the festival organization.

From his first solo on record with the Luis Russell Orchestra, Coleman's playing exhibited a lighter sound more akin to Jabbo Smith than Louis Armstrong, yet his phrasing is more in the Armstrong vein than that of Smith. In many respects his playing was stylistically related to the playing by other swing era trumpeters such as Roy Eldridge and Buck Clayton.

This article uses material from the article Bill Coleman from the free encyclopedia Wikipedia and it is licensed under the GNU Free Documentation License.