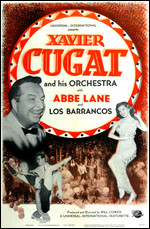 Xavier Cugat (Catalan: [ie kuat]; 1 January 1900 – 27 October 1990) was a Spanish-American bandleader who spent his formative years in Havana, Cuba. A trained violinist and arranger, he was a personality in the spread of Latin music in United States popular music. He was also a cartoonist. In New York, he was the leader of the resident orchestra at the Waldorf-Astoria before and after World War II.

The personal papers of Xavier Cugat are preserved in the Biblioteca de Catalunya.

Cugat was born as Francesc d'Asís Xavier Cugat Mingall de Bru i Deulofeu in Girona, Spain.[1] His family emigrated to Cuba when Xavier was five. He was trained as a classical violinist and played with the Orchestra of the Teatro Nacional in Havana. On 6 July 1915, Cugat and his family arrived in New York as immigrant passengers on board the S.S. Havana. Cugat appeared in recitals with Enrico Caruso, playing violin solos.

Entering the world of show business, he played with a band called The Gigolos during the tango craze.[2] Later, he went to work for the Los Angeles Times as a cartoonist. Cugat's caricatures were later nationally syndicated. His older brother, Francis, was an artist of some note, having painted the famous cover art for F. Scott Fitzgerald's novel, The Great Gatsby.[3]

In the late 1920s, as sound began to be used in films, Cugat put together another tango band that had some success in early short musical films. And by the early 1930s, he began appearing with his group in feature films. His first notable appearance occurred in 1942, in the Columbia production You Were Never Lovelier with Rita Hayworth, Fred Astaire, and Adolphe Menjou.

In 1931, Cugat had taken his band to New York for the 1931 opening of the Waldorf Astoria Hotel, and he eventually replaced Jack Denny as the leader of the hotel's resident band. For 16 years, Cugat helmed the Waldorf-Astoria Hotel's orchestra, shuttling between New York and Los Angeles for most of the next 30 years.

One of his trademarks was to hold a Chihuahua while he waved his baton with the other arm.[4]

Cugat died of heart failure, at the age of 90, in Barcelona and was buried in his native Girona.

Xavier Cugat is mentioned in the lyrics of the 1980s song "Joe le taxi" by Vanessa Paradis.

He is referenced in A Goofy Movie (1995). After Max informs his father Goofy of the popularity of Powerline, Goofy replies "Oh, not bigger than Xavier Cugat, the mambo king!"

He is referenced in Ziegfeld Follies (1946). When Keenan Wynn is asked to spell "Plaza", for the letter "Z" he says, "As in Xavier Cugat!"

He is referenced in The Simpsons Episode Jazzy and the Pussycats by Bart when he is trying to speak like a Jazz musician.

He was mentioned occasionally in "I Love Lucy" as the main competitor to the similar latin band of "Ricky Ricardo" (played by Desi Arnaz). If someone wanted to insult "Ricky", they would threaten to take their talents to Cugat instead.

Xavier Cugat is referenced erroneously as a television producer by Peter Cook as Clive in the 1976 comedy recording "The Horn" on "Ad Nauseum" by Derek & Clive.

This article uses material from the article Xavier Cugat from the free encyclopedia Wikipedia and it is licensed under the GNU Free Documentation License.

Wolfgang Amadeus Mozart Violinkonzert Nr. 4 D-Dur KV 218
Update Required To play the media you will need to either update your browser to a recent version or update your Flash plugin.