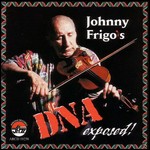 His son, Derek John Frigo, was the lead guitarist for the rock band Enuff Z'nuff. Derek Frigo died of a drug overdose on May 28, 2004.[1]

Johnny Frigo died at age 90 of complications from a fall. He had been battling cancer according to some reports of his death.

Frigo was born in Chicago, Illinois, and studied violin for only three years beginning at age 7. In high school he started to play double bass in dance orchestras, and would continue his career as a bassist for several decades. In 1942 he played with Chico Marx's orchestra and did a comedy routine on violin with Marx on piano.[2] He entered the United States Coast Guard during World War II only to find himself playing in a band on Ellis Island with Al Haig and Kai Winding.

After a brief turn at active service near the end of the war he moved to New Jersey. He toured with Jimmy Dorsey's band from 1945 to 1947, later forming the Soft Winds trio with Dorsey's guitarist Herb Ellis and pianist Lou Carter. During this time he wrote the music and words of the standard "Detour Ahead",[2] which has been recorded by Billie Holiday, Sarah Vaughn, Ella Fitzgerald, Bill Evans, and Carola among others.

In 1951 Frigo returned to Chicago, primarily working as a studio bassist and arranger. He also led the band at Mr. Kelly's, a popular Rush Street nightspot. Between 1951 and 1960 he played fiddle hoedowns and novelties with the Sage Riders, the house band for WLS's long-running National Barn Dance. He continued playing with the Sage Riders for another fourteen years after WGN revived the show in 1961. John Frigo is credited as playing fiddle for the track "A Rectangle Picture" on the Mason Proffit album "Wanted" released in 1969 on the Happy Tiger label.

In the mid-1980s Frigo largely abandoned playing bass to refocus on the violin. After sitting in with Monty Alexander, Ray Brown, and Herb Ellis at Chicago's Jazz Showcase, Alexander invited him to join the trio for several upcoming live dates that produced Triple Treat II and Triple Treat III (Concord 1987). Johnny Carson once asked Frigo why it took so long to start his career as a violinist. Frigo replied "I wanna take as long as I could in my life so I wouldn't have time to become a has-been".[2]

He performed as a jazz violinist at festivals worldwide, including the Umbria Jazz Festival and North Sea Jazz Festival. Frigo also was a published poet and artist and played flugelhorn. He wrote and performed the 1969 Chicago Cubs fight song "Hey Hey, Holy Mackerel."[3]

This article uses material from the article Johnny Frigo from the free encyclopedia Wikipedia and it is licensed under the GNU Free Documentation License.