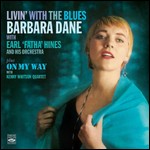 "Bessie Smith in stereo," wrote jazz critic Leonard Feather in the late 1950s. Time wrote of Dane: "The voice is pure, rich ... rare as a 20 carat diamond" and quoted Louis Armstrong's exclamation upon hearing her at the Pasadena jazz festival: "Did you get that chick? She's a gasser!" [1] On the occasion of her 85th birthday, Boston Globe music critic James Reed called her "one of the true unsung heroes of American music." [2]

Barbara Dane's parents arrived in Detroit from Arkansas in the 1920s. Out of high school, Dane began to sing regularly at demonstrations for racial equality and economic justice. While still in her teens, she sat in with bands around town and won the interest of local music promoters. She got an offer to tour with Alvino Rey's band, but she turned it down in favor of singing at factory gates and in union halls.[3]

Moving to San Francisco in 1949, Dane began raising her own family and singing her folk and topical songs around town as well as on radio and television. A jazz revival was then shaking the town, and by the 1950s, she became a familiar figure at clubs along the city's Embarcadero with her own versions of women's blues and jazz tunes. New Orleans jazz musicians like George Lewis and Kid Ory and locals like Turk Murphy, Burt Bales, Bob Mielke and others regularly invited her onto the bandstand. Her first professional jazz job was with Turk Murphy at the Tin Angel in 1956.

To Ebony, she seemed "startlingly blonde, especially when that powerful dusky alto voice begins to moan of trouble, two-timing men and freedom ... with stubborn determination, enthusiasm and a basic love for the underdog, [she is] making a name for herself ... aided and abetted by some of the oldest names in jazz who helped give birth to the blues." The seven-page article was filled with photos of Dane working with Memphis Slim, Willie Dixon, Muddy Waters, Clara Ward, Mama Yancey, Little Brother Montgomery and others.[4]

By 1959, Louis Armstrong had asked Time magazine readers: "Did you get that chick? She's a gasser!" and invited her to appear with him on national television. She appeared with Armstrong on the Timex All-Star Jazz Show hosted by Jackie Gleason on January 7, 1959.[5] She toured the East Coast with Jack Teagarden,[3] appeared in Chicago with Art Hodes, Roosevelt Sykes, Little Brother Montgomery, Memphis Slim, Otis Spann, Willie Dixon and others, played New York with Wilbur De Paris and his band, and appeared on The Tonight Show Starring Johnny Carson as a solo guest artist. Other national TV work included The Steve Allen Show, Bobby Troop's Stars of Jazz, and Alfred Hitchcock Presents.[1] In 1961, the singer opened her own club, Sugar Hill: Home of the Blues, on San Francisco's Broadway in the North Beach district, with the idea of creating a venue for the blues in a tourist district where a wider audience could hear it.[6] There Dane performed regularly with her two most constant musical companions: Kenny "Good News" Whitson on piano and cornet and Wellman Braud, former Ellington bassist.[7]

In her speech to the GI Movement of the Vietnam War Era (whose text can be found in the booklet that's included in Paredon Records' FTA! Songs of the GI Resistance vinyl album of 1970), Barbara Dane said, "I was too stubborn to hire one of the greed-head managers, probably because I'm a woman who likes to speak for herself. I always made my own deals and contracts, and after figuring out the economics of it, I was free to choose when and where I worked, able to spend lots more time with my three children and doing political work, and even brought home more money in the end, by not going for the "bigtime." I did make some really nice records, because I was able to choose and work with wonderfully gifted musicians."[8]

She continued to weave in appearances as a solo performer on the coffeehouse circuit with her folk-style guitar. She also stepped up her work in the movements for peace and justice as the struggle for civil rights spread and the Vietnam war escalated. She sang at peace demonstrations in Washington, D.C. and throughout the U.S. and toured anti-war GI coffeehouses all over the world. In 1966, Barbara Dane became the first U.S. musician to tour post-revolutionary Cuba.[9]

In 1970, Dane founded Paredon Records with husband Irwin Silber,[10] a label specializing in international protest music. She produced nearly 50 albums, including three of her own, over a 12-year period. The label was later incorporated into Smithsonian-Folkways, a label of the Smithsonian Institution, and is available through its catalog.[11]

In 1978, Dane appeared with Pete Seeger at a rally in New York for striking coal miners.[12]

"The world needs more people like Barbara, someone who is willing to follow her conscience. She is, if the term must be used, a hero," Bob Dylan wrote in an open letter to Broadside Magazine in 1964. [13]

When she was in her late 1970s, Philip Elwood, jazz critic of the '[San Francisco Examiner, said of her: "Dane is back and beautiful...she has an immense voice, remarkably well-tuned...capable of exquisite presentations regardless of the material. As a gut-level blues singer she is without compare." Blues writer Lee Hildebrand calls her "perhaps the finest living interpreter of the classic blues of the 1920s." In a 2010 profile on Barbara produced by Steven Short of KALW in San Francisco, Bonnie Raitt said "she’s always been a role model and a hero of mine – musically and politically. I mean, the arc of her life so informs mine that – she’s – I really can’t think of anyone I admire [more], the way that she’s lived her life." The interview is archived on KALW's website.[14]

In 1996 Arhoolie Records issued a compact disk titled Sometimes I Believe She Loves Me, from tapes recorded 30 years earlier when Dane sang solo and improvised blues with Lightnin' Hopkins. Tradition Records reissued her only purely folk-style LP When I Was a Young Girl', with Tom Paley on guitar and banjo, in 1997 under the title Anthology of American Folk Music. In 2016, Barbara released the CD Throw It Away... with pianist Tammy Hall on Dreadnaught Music. In 2017, Smithsonian Folkways re-issued the original 1965 Folkways LP Barbara Dane and The Chambers Brothers on vinyl.

Dane has issued some of her earlier blues and jazz recordings as CDs which are available online Barbara Dane CDs. Titles include:

This article uses material from the article Barbara Dane from the free encyclopedia Wikipedia and it is licensed under the GNU Free Documentation License.

Domenico Scarlatti Sonate d-moll K 32
Update Required To play the media you will need to either update your browser to a recent version or update your Flash plugin.