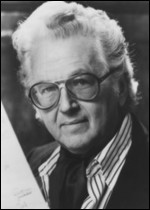 Mel Powell (born Melvin Epstein) (February 12, 1923 April 24, 1998) was an American jazz pianist, composer of classical music, and music educator. He won the Pulitzer Prize for Music in 1990. Powell was the founding dean of the music department at the California Institute of the Arts.[1]

Mel Powell was born Melvin D. Epstein on February 12, 1923, in The Bronx, New York City to Russian Jewish parents, Milton Epstein and Mildred Mark Epstein.[2] He began playing piano at age four, taking lessons from, among others, Nadia Reisenberg.[1] A passionate baseball fan, his home was within sight of Yankee Stadium. A hand injury while playing baseball as a boy, however, convinced him to choose music as a career path instead of sports.[3] Powell dreamed of life as a concert pianist until one night his older brother took him to see jazz pianist Teddy Wilson play,[1] and later to a concert featuring Benny Goodman. In a 1987 interview with The New Yorker magazine Powell said "I had never heard anything as ecstatic as this music", prompting a shift from classical to jazz piano.[3] By the age of 14 Powell was performing jazz professionally around New York City.[1] As early as 1939, he was working with Bobby Hackett, George Brunies, and Zutty Singleton, as well as writing arrangements for Earl Hines.[3] He changed his last name from Epstein to Powell in 1941 shortly before joining Benny Goodman's band.[4]

Powell's style was rooted in the stride style that was the direct pre-cursor to swing piano. Newly-named, the teenage Mel Powell became a pianist and arranger for Benny Goodman in 1941. One composition from his Goodman years, The Earl, is perhaps his best-known from that time. It is notable that the songdedicated to Earl "Fatha" Hines, one of Powell's piano heroeswas recorded without a drummer.[3] After nearly two years with Goodman, Powell played briefly with the CBS radio band under director Raymond Scott[3] before Uncle Sam came calling. With World War II at its height, Powell was drafted into the U.S. Army, but fought his battles from a piano stool, being assigned to Glenn Miller's Army Air Force Band from 1943 to 1945.

Near war's end, Mel Powell was stationed in Paris, France where he played with Django Reinhardt, and then returned for a brief stint in Benny Goodman's band again after being discharged from the military. It was around this time, the mid-to-late 1940s, that Powell moved to Hollywood and ventured into providing music for movies and cartoonsnotably Tom and Jerry.[1] In 1948 he played himself in the movie A Song Is Born as the jazz pianist working with Benny Goodman. In this movie he worked along with many other famous jazz players including Louis Armstrong. It was during his time in Hollywood that he met and married actress Martha Scott. Mel Powell had a major health crisis in the late 1940s when he developed Muscular dystrophy. Confined to a wheelchair for some time, then walking with aid of a cane, the illness effectively ended his ability to work as a traveling musician again with Goodman or other bands.[5] It was a career and life-changing event, prompting Powell to devote himself to music composition rather than performance. From 1948 to 1952 he studied under German composer and music theorist Paul Hindemith at Yale University.[5]

At first sticking to traditional neo-Classical styles of composition Powell increasingly explored concepts in Atonality, or "non-tonal" music as he called it,[3] as well as Serialism advocated by Austrian composer Arnold Schoenberg.[1] After receiving his degree in 1952, Powell embarked on a career as a music educator, first at Mannes College of Music and Queens College in his native New York City,[1] then returning to Yale in 1958, succeeding Hindemith as chair of composition faculty and director of one of the nation's first electronic music studios.[5] Powell composed several electronic music pieces in the 1960s, some of which were performed at the Electric Circus in New York's Greenwich Village,[1] a venue that also saw performances by groundbreaking rock music acts like The Velvet Underground, The Grateful Dead, and Blue Öyster Cult. Mel Powell had not completely turned his back on jazz music however. While teaching in the 1950s, he also played piano and recorded music with Benny Goodman again as well as on his own.[3] Showing the broad range of his talent, Powell composed for orchestras, choruses, singers, and chamber ensembles throughout the 1960s, 1970s, and 1980s.[1] In 1969 Powell returned to California to serve as founding dean of the California Institute of the Arts in Valencia, California. After serving as Provost of the Institute from 1972 to 1976 he was awarded the Roy O. Disney Professorship of music, and taught at the Institute until shortly before his death.[5]

In 1987 Mel Powell joined other music greats for a jazz festival on the cruise ship SS Norway playing alongside Benny Carter, Howard Alden, Milt Hinton, and Louie Bellson and others.[3] One performance has been documented on the CD release The Return of Mel Powell (Chiaroscuro Records). This CD includes twenty minutes of Powell discussing his life and his reasons for leaving jazz. In an interview with The New Yorker magazine jazz critic Whitney Balliett Powell stated: "I have decided that when I retire I will think through my decision to leave jazz with the help of Freud and Jung. At the moment, I suspect it was this: I had done what I felt I had to do in jazz. I had decided it did not hold the deepest interest for me musically. And I had decided that it was a young man's music, even a black music. Also, the endless repetition of material in the Goodman band playing the same tunes day after day and night after night got to me. That repetition tended to kill spontaneity, which is the heart of jazz and which can give a lifetime's nourishment."[3]

In 1990 Mel Powell received his highest career achievement, the Pulitzer Prize in Music for his work Duplicates: A Concerto for Two Pianos and Orchestra.[6] Powell expressed total surprise at winning the Pulitzer in a Los Angeles Times interview: "Being out here on the coast, far away from the whole Eastern establishment to which the Pulitzer is connected that made me a remote prospect. I just didn't expect it."[5] In an interview with The New York Times Powell related the story of how Duplicates origins came from his service in World War II and an anecdote he heard in Paris about Claude Debussy's search for perfect music. That, Powell, stated was his goal for Duplicates. The work, commissioned in 1987 for the Los Angeles Philharmonic by music patron Betty Freeman, took Powell more than two years to complete. It was made even more difficult as his muscular dystrophy, previously affecting only his legs, began to afflict his arms, thus his ability to play the piano.[7]

Besides the Pulitzer, other awards and honors for Mel Powell include the Creative Arts Medal from Brandeis University, a Guggenheim Fellowship, an honorary life membership in the Arnold Schoenberg Institute, a commission from the Koussevitzky Music Foundation for the Library of Congress, and a National Institute of Arts and Letters grant.[5] Some of Powell's notable students include Justin Connolly, Walter Hekster, Arturo Marquez, Lewis Spratlan, John Stewart, Lois V Vierk and John Ferritto.

Melvin "Mel" Powell died at his home in Sherman Oaks, California on April 24, 1998, from liver cancer. He was 75 years old.[5] Powell was survived by his wife, actress Martha Scott, two daughters and a son.[1] He was buried in the Masonic Cemetery in his wife's hometown of Jamesport, Missouri.

This article uses material from the article Mel Powell from the free encyclopedia Wikipedia and it is licensed under the GNU Free Documentation License.