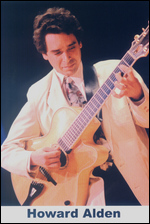 Howard Vincent Alden was born in Newport Beach, California on October 17, 1958.[1][2] He grew up in Huntington Beach, playing piano, harmonica, the four-string tenor guitar, and then four-string banjo at age ten.[1] After hearing recordings of Barney Kessel, Charlie Christian, Django Reinhardt and other jazz guitar greats, he got a six-string guitar and started teaching himself to play. As a teenager he played both instruments at venues in the Los Angeles area.[3] He studied guitar with Jimmy Wyble when he was 16. In 1977–78 he studied jazz guitar at the Guitar Institute of Technology (GIT) in Hollywood with Herb Ellis, Joe Pass, and Howard Roberts.[1] At GIT he assisted Roberts in organizing and preparing curriculum materials. Alden then conducted some of his own classes at GIT.[4]

Alden made his first trip to the east coast in the summer of 1979, playing in a trio led by vibraphonist Red Norvo for three months at Resorts International in Atlantic City.

He moved to New York City in 1982 to play an extended engagement at the Café Carlyle with jazz pianist/songwriter Joe Bushkin. Soon afterwards, he was discovered by Joe Williams and Woody Herman. In 1983 he was already collaborating with Dick Hyman, when he appeared with him and a host of other musicians at Eubie Blake's one-hundredth birthday concert.[5]

Alden formed the Alden-Barrett Quintet in 1985 with Dan Barrett, which played in the swing idiom, as he has done for most of his career. He also began partnerships with Kenny Davern and Jack Lesberg. He joined George Van Eps, innovator of the seven-string guitar, on tour and recorded albums with him, switching to the seven-string himself in 1992.[1]

Alden recorded the guitar performances for Sean Penn's character Emmet Ray in Woody Allen's 1999 film Sweet and Lowdown, and taught Penn how to mime the performances for the film. The score also featured Bucky Pizzarelli on rhythm guitar and arrangements by pianist Dick Hyman.[7]

This article uses material from the article Howard Alden from the free encyclopedia Wikipedia and it is licensed under the GNU Free Documentation License.