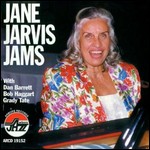 Jane Nossette Jarvis (October 31, 1915 – January 25, 2010) was an American jazz pianist. She was also known for her work as a composer, a baseball stadium organist and a recording industry executive. She was born in Vincennes, Indiana to Charles and Luella Nossette.

Jarvis was recognized as a piano prodigy at the age of five and she studied under a Vincennes University professor as a young girl. Her family moved to Gary, Indiana soon afterward, and Jarvis was hired to play the piano at radio station WJKS in Gary in 1927. At the age of 13, she was orphaned when her parents died in a train-auto wreck and she returned to Vincennes, graduating from high school in 1932. By then, she had already studied music at the Chicago Conservatory of Music, the Bush Conservatory of Music, Loyola University Chicago and DePauw University.

By 1954, Jarvis was on television at station WTMJ-TV in Milwaukee, hosting a show called "Jivin' with Jarvis" while serving as staff pianist and organist. At the time, the Milwaukee Braves had just relocated from Boston and sought out Jarvis to be the organist at Milwaukee County Stadium. In a 1984 interview, Jarvis told John S. Wilson of The New York Times that she asked when she would get to perform and a Braves official replied, "When the umpire says 'Three outs.'" Jarvis, a sports neophyte, then asked, "And when would that be?"

Jarvis stayed with the Braves for eight seasons and then headed to New York City, where she took a position with the Muzak Corporation as a staff composer and arranger. She would rise to become a corporate vice-president and its director of recording and programming.

In 1964, she was hired by the New York Mets to play the organ at Shea Stadium. She is remembered at Shea for playing the Mets's theme song, "Meet the Mets", as the team took the field before every game, as well as for her renditions of the Mexican Hat Dance during the seventh-inning stretch.

Jarvis left Muzak in 1978, and the next year she left the Mets to concentrate on her first musical love, jazz piano. She became a fixture at New York nightclubs, frequently playing alongside bassist Milt Hinton. She became a founding member of the Statesmen of Jazz, a group of jazz musicians age 65 and older, sponsored by the American Federation of Jazz Societies. One goal of the Statesmen is to present the wonders of jazz music to young audiences across the United States. The Statesmen have also traveled abroad, performing in Japan, among other places.

Jarvis released several albums of her jazz piano work, including Jane Jarvis Jams (1995) and Atlantic/Pacific (2000). In addition to Hinton, Jarvis has often collaborated with trombonist Benny Powell and bassist Earl May. As a member of ASCAP, she also had over three hundred compositions to her credit.

Married and divorced three times, Jarvis lived in Cocoa Beach, Florida, where she was honored in 2003 by the Space Coast Jazz Society for her lifetime achievement. On March 15, 2008, Jarvis was displaced from her New York City residence when a construction crane collapsed, damaging her building on East 50th Street.[1]

Jarvis spent the final years of her life and died at the Lillian Booth Actors Home in Englewood, New Jersey. She is survived by a son, Brian, a daughter, Jeanne, and several grandchildren and great-grandchildren.[2]

This article uses material from the article Jane Jarvis from the free encyclopedia Wikipedia and it is licensed under the GNU Free Documentation License.