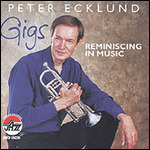 Peter Ecklund (b. 1945, Woodbridge, Connecticut) is an American jazz cornetist.

Ecklund graduated from Yale University in 1967, then played with Gregg Allman, Maria Muldaur, Leon Redbone, and Paul Butterfield. He formed the Galvanized Jazz Band in the late 1960s and toured with Paula Lockheart, in addition to working with many pop and rock bands in the 1970s and 1980s. He played with Vince Giordano's Memphis Nighthawks in the 1980s, and then with the Orphan Newsboys (led by Marty Grosz) from 1988. He is also a frequent collaborator with David Bromberg, and is a member of Bromberg's Big Band.

This article uses material from the article Peter Ecklund from the free encyclopedia Wikipedia and it is licensed under the GNU Free Documentation License.