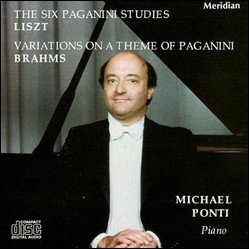 Ponti was born in Freiburg im Breisgau, Germany, but has lived in the United States for most of his life. He studied piano in Washington DC with Gilmour McDonald from 1954 to 1955, McDonald having been a pupil of the virtuoso Leopold Godowsky.[1] Then he studied with Erich Flinsch (who had been a pupil of and an assistant to Emil von Sauer) in Frankfurt from 1955 to 1961.[2]

In 1964, Ponti won first prize in the Busoni Piano Competition in Italy. Soon afterward, he made his Vienna debut by performing Bartók's 2nd Piano Concerto, with Wolfgang Sawallisch conducting.[3] Since then, he has toured widely, including a 1974 visit to Southern Africa[4] and a 1977 visit to Australia. Also in 1977, he founded his own trio (with violinist Robert Zimansky and cellist Jan Polasek).[2]

Ponti is noted for his wide-ranging recordings of the unknown romantic repertoire on the Vox and Candide labels. He recorded a series of concertos, many of which had never been recorded before, and some of which have been unrecorded since, by such composers as Clara Schumann, Ignaz Moscheles, Charles-Valentin Alkan, Sigismond Thalberg, Moritz Moszkowski and Hans Bronsart von Schellendorff. In addition, he committed to disc the complete piano music of Scriabin, much of which was otherwise unavailable then, though it has since been recorded by Vladimir Ashkenazy, Piers Lane and others. He also recorded the complete piano music of Tchaikovsky and Rachmaninoff. His output amounts to more than 80 discs, and much of his output has been released on CD.[2]

In the late 1990s, his performing career was ended by a stroke that left him without the use of his right hand and arm. Despite extensive rehabilitation, he has been unable to return to regular performance or recording. However, he has given exciting concerts of left-handed music.[5]

This article uses material from the article Michael Ponti from the free encyclopedia Wikipedia and it is licensed under the GNU Free Documentation License.