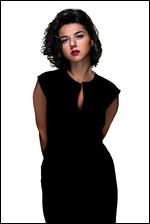 Khatia Buniatishvili began studying piano under her mother at the age of three.[1] She gave her first concert with the Chamber Orchestra in Tbilisi at the age of six. From the age of ten she gave concerts in Europe, Ukraine, Armenia, Israel and the USA.[2] She graduated from the Tbilisi Central Music School, then entered the Tbilisi State Conservatory in 2004 (with Prof. Tengiz Amirejibi).[2] From 2006 Khatia studied with Prof. Oleg Maisenberg at the Vienna University of Music and Performing Arts.

Buniatishvili and her (older) sister Gvantsa learned the piano together and performed duets at home.[3][4] She speaks five languages fluently: Georgian, French, English, German and Russian.

During the last seasons, Khatia was engaged for different projects: 70th anniversary of United Nations - Charity concert in favor of Syrian refugees, Global Citizen festival Hamburg 2017, Charity Concert in Kiev in favor of wounded persons in ATO area, "to Russia with Love" concert against violation of Human Rights in Russia, United Nations Climate Change Conference - Marrakech Climate Show, participation in DLDWomen conference. She is the ambassador of the development and humanitarian organisation “Plan International” and the nonprofit Organization “Fondation Cœur et Recherche”.

Khatia is an exclusive artist of SONY Classical. Her discography includes Liszt Album 2011, Chopin Album 2012, "Motherland" 2014, "Kaleidoscope" 2016, Rachmaninoff album 2017. She is a two-time ECHO Klassik Award winner (2012 and 2016), which is one of the very few most important classical awards in the world. In 2015 Khatia collaborated with rock group Coldplay for their last album "A Head Full Of Dreams”. Khatia speaks 5 languages fluently: Georgian, French, English, German, Russian.

In 2010, Buniatishvili signed an exclusive recording contract with Sony Classical Records.[5] Her 2011 debut album marked Liszt’s 200th anniversary, and included his Sonata in B minor, Liebestraum No 3, La Campanella, Hungarian Rhapsody No 2, and Mephisto Waltz.[6]

Classic FM stated in its review of the album that "Buniatishvili is a young artist with a huge temperament and technique that puts one in mind of the young Martha Argerich".[7]

In 2012 her second album was devoted to Chopin, combining solo piano works with Chopin's Piano Concerto No. 2 in F minor, accompanied by the Orchestre de Paris and Paavo Järvi. The Guardian reported "This is playing straight from the heart from one of today's most exciting and technically gifted young pianists".[8]

In 2014, Buniatishvili released her third album on Sony Classical, titled Motherland. Rather than being devoted to one particular composer as her previous albums were, Motherland was an assortment of personally significant pieces, including music from her homeland Georgia. She dedicated the album to her mother.[9][10]

Buniatishvili has received the following prizes and awards:

This article uses material from the article Khatia Buniatishvili from the free encyclopedia Wikipedia and it is licensed under the GNU Free Documentation License.