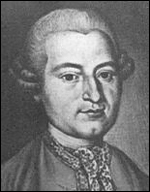 Hofmann was the son of a highly educated civil servant, and at the age of seven became a chorister in the chapel of the Empress Elisabeth Christine, where his choral director and teacher was very likely František Tůma.

He was also a student later on of Georg Christoph Wagenseil and Giuseppe Trani (violin). His studies included at various points violin, harpsichord and composition.

In 1758 Hofmann secured what may have been his first appointment, as "musicus" at St. Michael's. He is known to have become choral director at St. Peter's Church in 1764 and, in 1766, kapellmeister. In 1769 he became a teacher to the royal family.

The position of Kapellmeister at the Cathedral of St. Stephan, a post he acquired in 1772, was among his next responsibilities. At this time he declined the directorship of the Imperial Chapel, but did apply there two years later in 1774, failing in his application. (Giuseppe Bonno became director of the Imperial Chapel instead, which had become open upon the death of Florian Leopold Gassmann.)

On 9 May 1791, at his own request, Mozart was appointed assistant-Kapellmeister to Hofmann, an unpaid position. At the time Hofmann was ill and Mozart anticipated becoming Kapellmeister upon Hofmann's death. However, Hofmann survived Mozart and kept his post as Cathedral Kapellmeister until he died.[1]

The following list was drawn up by George Cook Kimball in his Ph.D. thesis.[2]

The following list was drawn up by Allan Badley in his Ph.D. thesis.[3]

(Recent recordings of his music include recordings of many of the concertos, some of the symphonies including five on Naxos Records, etc., including a CD from 2000 of Artaria discoveries and others of cello flute, violin and oboe concertos.)

His compositions have been catalogued by Allan Badley.

This article uses material from the article Leopold Hofmann from the free encyclopedia Wikipedia and it is licensed under the GNU Free Documentation License.

Arthur Sullivan Cellokonzert D-Dur
Update Required To play the media you will need to either update your browser to a recent version or update your Flash plugin.