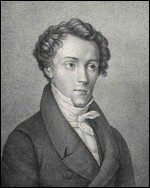 He was born at Magdeburg, as a son of father Johann Peter August Fesca, who was the market judge of Magdenburg and active in the musical part in the city, and mother, a singer educated under Johann Adam Hiller, Marianne Podleska. He received his early musical education in Magdenburg and completed his studies at Leipzig under thomaskantor August Eberhard Müller, and at the early age of fifteen appeared before the public with several concertos for the violin, which were received with general applause, and resulted in his being appointed leading violinist of the Leipzig Gewandhaus Orchestra. This position he occupied till 1806, when he became concertmaster to the duke Peter I of Oldenburg. In 1808 he was appointed solo-violinist by King Jerome of Westphalia at state theater of Cassel, and there he remained till the end of the French occupation (1814), when he went to Vienna, and soon afterwards to Karlsruhe, having been appointed concertmaster to the grand duke of Baden. His failing health prevented him from enjoying the numerous and well-deserved triumphs he owed to his art, and in 1826 he died of consumption at the early age of thirty-seven.

As a virtuoso, Fesca ranks amongst the best masters of the German school of violinists, the school subsequently of Spohr and of Joachim. Especially as leader of a quartet he is said to have been unrivaled with regard to classic dignity and simplicity of style. Amongst his compositions, his quartets for stringed instruments and other pieces of chamber music are the most remarkable. His three symphonies (No. 1 in Eb, Op. 6; No. 2 in D, Op. 10; No. 3 in D, Op. 13) along with chamber works were still listed in Augener's catalog as late as 1861 [1] His two operas, Cantemire and Omar and Leila, were less successful. He also wrote some sacred compositions, and numerous songs and vocal quartets.

Fesca's son Alexander also achieved some note as a composer.

This article uses material from the article Frederic Ernest Fesca from the free encyclopedia Wikipedia and it is licensed under the GNU Free Documentation License.

Franz Schubert Menuetto aus dem Streichquartett B-Dur D 18
Update Required To play the media you will need to either update your browser to a recent version or update your Flash plugin.