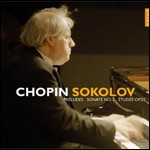 Grigory Lipmanovich Sokolov (Russian: Григо́рий Ли́пманович Соколо́в; born April 18, 1950 in Leningrad, now Saint Petersburg,[1]) is a Russian[2] concert pianist, who is widely considered as one of the greatest concert pianists of all time [3].

Sokolov was born to Jewish father Lipman Girshevich Sokolov and Russian mother Galina Nikolayevna Zelenetskaya. He began studying the piano at the age of five and he entered the Leningrad Conservatory's special school for children at the age of seven to study with Leah Zelikhman. After graduating from the children's school he continued studying at the Conservatory with Moisey Khalfin.[4] At 12, he gave his first major recital in Moscow, in a concert of works by Bach, Beethoven, Schumann, Chopin, Mendelssohn, Rachmaninoff, Scriabin, Liszt, Debussy and Shostakovich at the Philharmonic Society.[5] At age 16, he came to international attention when the jury at the 1966 International Tchaikovsky Piano Competition, headed by Emil Gilels, unanimously awarded him the gold medal. It seems this may have been a surprising result: "16-year old Grisha Sokolov who finally became the winner of that competition was not taken seriously by anyone at that time."[6]

"He possesses brilliant finger and chord technique, he easily wields the piano, so easily that he performs the prestissimo of the last movement of the Saint-Saëns Concerto No. 2 with truly refined lightness. It was a startling performance. Doubtless we are going to hear much more about this young talented pianist..."[5]

In fact, despite the international prestige of his Tchaikovsky Competition success, Sokolov's international career began to flourish only towards the end of the 1980s. Some have speculated [7] that his not defecting and the limited travelling allowed under the Soviet regime were to blame. This is contradicted by the fact[5] that Sokolov gave U.S. tours in 1969, 1971, 1975 and 1979, as well as numerous recitals elsewhere in the world such as Finland and Japan. "Sokolov's life as a touring soloist is quite overcrowded. He tours a great deal in both his motherland and abroad."[5]

The 1980s seem to have posed something of a stumbling-block to Sokolov's career in the U.S. "In the beginning, I played a lot of single concerts in America, in 1969, '71 and, I think, 1975. After that there was a break in relationships between the U.S. and the Soviet Union--they were disconnected by the Afghanistan war. A scheduled tour in the U.S. was cancelled in 1980. Then all cultural agreements between the two countries were cancelled."[8] In addition, during the breakup of the former Soviet Union, Sokolov played no concerts outside Russia.[9] He is now a well-known figure in concert halls around Europe, but much less so in the U.S.[10] Sokolov has released relatively few recordings to date, and released none for the twenty years between 1995[10] and 2015. But in 2014 he signed a contract with Deutsche Grammophon to release recordings of some of his live performances,[11] and in 2015 he released a 2-CD live Salzburg recital featuring two sonatas by Mozart, Chopin's cycle of 24 Preludes, and encore pieces by Scriabin, Chopin, Rameau and Bach.

In March 2009, it was reported that Sokolov cancelled a planned concert in London because of British visa requirements demanding that all non-E.U. workers provide fingerprints and eye prints with every visa application (he also cancelled his 2008 concert on seemingly similar grounds). Sokolov protested that such requirements had echoes of Soviet oppression.[12]

When asked, Sokolov cited the following pianists as having inspired him in his years of studies: "Of those whom I heard on the stage I'd like to name first of all Emil Gilels. Judging by the records, it was Rachmaninoff, Sofronitsky, Glenn Gould, Solomon [and] Lipatti. As to aesthetics, I feel most close to Anton Rubinstein."[5]

Sokolov has significantly reduced the number of his concerto performances, for the following reason: "It's very simple. For piano is written an ocean of music, and during your lifetime you are not able to play even a small part of it. Then with orchestra it's not easy to find enough time to rehearse, or to find an orchestra which is interested in the final product and not looking at their watch. It's also not easy with conductors, because you must find the combination of a very good musician who has this special talent to follow and to understand the music in the same way as you. It's very seldom, I must say! And then maybe the worst: if you play a solo piece several times over several days you will develop, going to another level with it, but with a concerto you play this piece more and more, but with each orchestra and conductor you must start again at the first rehearsal. So, if you spend so much energy that you could use much more effectively for recitals, why do you do it? I very much like the fact that everything I make depends only on me. With a hundred people it's almost impossible. You have not the responsibility."[13]

The 14 CDs (2 of Bach, 2 of Beethoven, 2 of Schubert, 2 of Chopin, 1 of Brahms, and 1 of Scriabin, Rachmaninoff and Prokofiev—all recorded by the label Opus 111, plus a 2-CD 2008 recital set released in 2015 and another 2-CD set taken from recitals in 2013 and released in 2016, both issued by DG on CD and LP) and 1 DVD (a live recital in Paris) that are currently (2015) available for Sokolov constitute a snapshot of the repertoire that Sokolov has so far performed. There is now a second (DG) DVD, of a concert (including the 'Hammerklavier' Sonata) recorded in the Berlin Philharmonie on June 5, 2013. This DVD was directed by Bruno Monsaingeon. A more extensive repertoire listing is as follows:

This article uses material from the article Grigory Sokolov from the free encyclopedia Wikipedia and it is licensed under the GNU Free Documentation License.