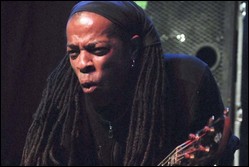 Douglas Arthur "Doug" Wimbish (born September 22, 1956) is an American bass player, primarily known for being a member of rock band Living Colour and funk/dub/hip hop collective Tackhead, and as a session musician with artists such as The Rolling Stones, Mick Jagger, Depeche Mode, James Brown, Annie Lennox, and Barrington Levy (as well as his studio work for the rap/hip hop label Sugarhill Records and the experimental dub label On-U Sound).

Together with McDonald and LeBlanc, Wimbish headed to London in 1984 and started working with producer Adrian Sherwood and formed the group Tackhead. Together with Tackhead and as a session bassist, Wimbish found himself in demand as a bass player for many artists and was considered as a permanent sideman for the Rolling Stones after the departure of bassist Bill Wyman in 1993, but lost the position to Darryl Jones. In the late 1980s Wimbish began crossing paths with vocalist Bernard Fowler, who collaborated with Tackhead and Little Axe. Both sang on records by the Rolling Stones, and Wimbish later played on the Stones' 1997 album Bridges to Babylon. Wimbish joined Living Colour in 1992 (he replaced Muzz Skillings, who left the band) to tour and record the album, Stain.

After Living Colour disbanded, Wimbish went back to London to continue his career as a studio bassist. In 1999 he formed the drum and bass group Jungle Funk together with drummer Will Calhoun and percussionist/vocalist Vinx. Also in 1999, Wimbish solo album Trippy Notes for Bass was released. In 2000, Living Colour was re-formed and toured in the United States, South America and Europe. In 2001 and 2002 Wimbish recorded and played with rapper Mos Def in a band called BlackJack Johnson, which also featured members of P-Funk and Bad Brains in the lineup.

Wimbish also formed Head Fake, a drum and bass project with drummer Will Calhoun. They released a CD, In The Area. In 2005 they started recording new songs. The recording took place in Brussels, Belgium and was followed by an extensive European tour. The CD has never been released. A Head>>Fake DVD was released in 2008. It features a recording of a Head>>Fake concert in Prague.

In 2008 Wimbish, signed with Enja Records, and released his second solo album, CinemaSonics.

In 2009, Living Colour released and toured for the album "The Chair in the Doorway".

With The Rolling Stones

This article uses material from the article Doug Wimbish from the free encyclopedia Wikipedia and it is licensed under the GNU Free Documentation License.