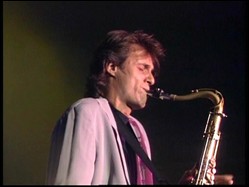 Chris White (born 13 July 1955, Bristol) English jazz/rock saxophonist who toured with Dire Straits[1] from 1985-1995, and who has played with many bands and artists, including Robbie Williams, Paul McCartney, Chris De Burgh and Mick Jagger.

White took up the saxophone at the age of 13, whilst a pupil at Lawrence Weston Secondary School. He started gigging a couple of years later, and was soon playing in the National Youth Jazz Orchestra and touring with other musicians (such as France Gall). He joined Dire Straits in 1985 for their two final world tours, and played at both the Live Aid concert and Nelson Mandela's 70th Birthday Concert in 1988. In 2002 he joined the band again together with Mark Knopfler, Guy Fletcher, John Illsley and Danny Cummings in the four small reunion gigs in London and Beaulieu Abbey.

In May 1990 he joined The Notting Hillbillies and one year later, released his first solo album, Shadowdance. A motorcycle accident in 1993 prevented him from touring with Pink Floyd.

In 2007 White played with Tom Jones and Bryan Ferry at the Concert for Diana at Wembley Stadium.

This article uses material from the article Chris White (saxophonist) from the free encyclopedia Wikipedia and it is licensed under the GNU Free Documentation License.

Josef Suk Humoreske aus "Sechs Stücke für Klavier" op. 7
Update Required To play the media you will need to either update your browser to a recent version or update your Flash plugin.