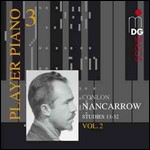 Nancarrow is best remembered for his pieces for the player piano, being one of the first composers to use auto-playing musical instruments, realising their potential to play far beyond human performance ability. He lived most of his life in relative isolation, and did not become widely known until the 1980s.

Nancarrow was born in Texarkana, Arkansas. He played trumpet in a jazz band in his youth, before studying music first in Cincinnati, Ohio and later in Boston, Massachusetts with Roger Sessions, Walter Piston and Nicolas Slonimsky. He met Arnold Schoenberg during that composer's brief stay in Boston in 1933.

In Boston, Nancarrow joined the Communist Party. When the Spanish Civil War broke out, he traveled to Spain to join the Abraham Lincoln Brigade in fighting against Francisco Franco. He was interned by the French at the Gurs internment camp in 1939.[1][2] Upon his return to the United States in 1939, he learned that his Brigade colleagues were finding it difficult to renew their U.S. passports. After spending some time in New York City, Nancarrow moved in 1940 to Mexico, in order to escape similar harassment.

He visited the United States briefly in 1947 but became a Mexican citizen in 1956. His next appearance in the U.S. was in San Francisco for the New Music America festival in 1981. He traveled regularly in the following years. In 1985, he consulted a lawyer about the possibility of returning to his native country. He was told that he would have to sign a statement swearing that he had been "young and foolish" when he embraced Communism, which he refused to do. Consequently, he continued living in Las Águilas, Mexico City, until his death at age 84. Though he had a few friends among Mexican composers, he was largely ignored by the Mexican musical establishment.

Nevertheless, it was in Mexico that Nancarrow did the work he is best known for today. He had already written some music in the United States, but the extreme technical demands they made on players meant that satisfactory performances were very rare. That situation did not improve in Mexico's musical environment, also with few musicians available who could perform his works, so the need to find an alternative way of having his pieces performed became even more pressing. Taking a suggestion from Henry Cowell's book New Musical Resources, which he bought in New York in 1939, Nancarrow found the answer in the player piano, with its ability to produce extremely complex rhythmic patterns at a speed far beyond the abilities of humans.

Cowell had suggested that just as there is a scale of pitch frequencies, there might also be a scale of tempi. Nancarrow undertook to create music which would superimpose tempi in cogent pieces, and by his twenty-first composition for player piano, had begun "sliding" (increasing and decreasing) tempi within strata. (See William Duckworth, Talking Music.) Nancarrow later said he had been interested in exploring electronic resources but that the piano rolls ultimately gave him more temporal control over his music.[3]

Temporarily buoyed by an inheritance, Nancarrow traveled to New York City in 1947 and bought a custom-built manual punching machine to enable him to punch the piano rolls. The machine was an adaptation of one used in the commercial production of rolls, and using it was very hard work and very slow. He also adapted the player pianos, increasing their dynamic range by tinkering with their mechanism and covering the hammers with leather (in one player piano) and metal (in the other) so as to produce a more percussive sound. On this trip to New York, he met Cowell and heard a performance of John Cage's Sonatas and Interludes for prepared piano (also influenced by Cowell's aesthetics), which would later lead to Nancarrow modestly experimenting with prepared piano in his Study No. 30.

Nancarrow's first pieces combined the harmonic language and melodic motifs of early jazz pianists like Art Tatum with extraordinarily complicated metrical schemes. The first five rolls he made are called the Boogie-Woogie Suite (later assigned the name Study No. 3 a-e). His later works were abstract, with no obvious references to any music apart from Nancarrow's.

Many of these later pieces (which he generally called studies) are canons in augmentation or diminution (i.e. prolation canons). While most canons using this device, such as those by Johann Sebastian Bach, have the tempos of the various parts in quite simple ratios, like 2:1, Nancarrow's canons are in far more complicated ratios. The Study No. 40, for example, has its parts in the ratio e:pi, while the Study No. 37 has twelve individual melodic lines, each one moving at a different tempo.

Having spent many years in obscurity, Nancarrow benefited from the 1969 release of an entire album of his work by Columbia Records as part of a brief flirtation of the label's classical division with modern avant-garde music.

In 1976-77, Peter Garland began publishing Nancarrow's scores in his Soundings journal, and Charles Amirkhanian began releasing recordings of the player piano works on the 1750 Arch label. Thus, at age 65, Nancarrow started coming to wide public attention. He became better known in the 1980s and was lauded by many, including György Ligeti, as one of the most significant composers of the century.

In 1982, he received a MacArthur Award which paid him $300,000 over 5 years. This increased interest in his work prompted him to write for conventional instruments, and he composed several works for small ensembles.

The complete contents of Nancarrow's studio, including the player piano rolls, the instruments, the libraries, and other documents and objects, are now in the Paul Sacher Foundation in Basel. The Germans Jürgen Hocker and Wolfgang Heisig are the current live performers of Nancarrow's rolls using similar acoustic instruments. Other performers of his works (often in arrangement for live musicians) include Thomas Adès, Alarm Will Sound and ensemble Calefax from the Netherlands who also recorded the Studies for player piano, already called 'Best CD of 2009' by Dutch newspaper Het Parool.[4] American clarinetist and composer Evan Ziporyn has adapted a number of Nancarrow's player piano studies for the Bang on a Can All-Stars to perform live.[5]

Composer György Ligeti described the music of Conlon Nancarrow as "the greatest discovery since Webern and Ives... something great and important for all music history! His music is so utterly original, enjoyable, perfectly constructed, but at the same time emotional...for me it's the best music of any composer living today."[9]

1750 Arch Records (recorded 1977) produced by Charles Amirkhanian and originally released on 4 LPs between 1977 and 1984. These are the only available recordings using Nancarrow's original instruments: two 1927 Ampico player pianos, one with metal-covered felt hammers and the other with leather strips on the hammers, representing the most faithful reproduction of what Nancarrow heard in his own studio.

Nancarrow's entire output for player piano has been recorded and released on the German Wergo label in 1989-1991.

In July 2008, Other Minds Records released a newly remastered version of the 1750 Arch Records recordings on 4 CDs.[14] The 4-CD set includes a 52-page booklet with the original liner notes by James Tenney, an essay by producer Charles Amirkhanian and 24 illustrations.

A recording of "Study #7", arranged for orchestra, was performed by the London Sinfonietta and included on their 2006 CD Warp Works & Twentieth Century Masters.

An arrangement of "Player Piano Study #6" for piano and marimba was recorded by Alan Feinberg and Daniel Druckman on Feinberg's 1994 album Fascinating Rhythm.

This article uses material from the article Conlon Nancarrow from the free encyclopedia Wikipedia and it is licensed under the GNU Free Documentation License.