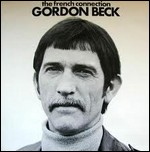 Beck was born in Brixton, London, and attended Pinner County Grammar School – the school Reg Dwight (Elton John) and Simon Le Bon later attended. He had a sister, Judy.[3] He studied piano in his youth, but decided to go into a career as an engineering technical draughtsman.[4] He went to Canada in 1957 to pursue this first career.[2]

Largely self-taught, he returned to music after returning from Canada in 1958, where he was exposed to the works of George Shearing and Dave Brubeck.[2][5]

Beck became a professional musician in 1960.[2] That year, he played with saxophonist Don Byas in Monte Carlo.[3] Beck joined the Tubby Hayes group in 1962 back in England.[2] He led his own bands from 1965, including Gyroscope, from 1968, a trio with bassist Jeff Clyne and drummer Tony Oxley.[3] Beck first played with vocalist Helen Merrill in 1969 and continued the relationship into the 1990s when she toured Europe.[3] From 1969 to 1972 he toured with saxophonist Phil Woods's European Rhythm Machine. Beck recorded ten albums with Woods.[2] The pianist was a member of Nucleus during 1973–74.[3] In the 1960s and 1970s he was a house pianist at Ronnie Scott's Jazz Club.[3] Beck also played "experimental funk in the Swiss musician George Gruntz's six-keyboard group Piano Conclave (1973-75), and free jazz with [...] British improv drummer John Stevens (1977, 1982)."[3]

From middle age, Beck played predominantly in mainland Europe.[3] He also recorded albums with Allan Holdsworth, Henri Texier, Didier Lockwood and others. He often played solo from the 1980s and started teaching music at the same point.[3] He toured Japan with Holdsworth in 1985.[2] Beck stopped performing around 2005 because of poor health.[2] He died in Ely, Cambridgeshire, on 6 November 2011.[2]

"He hardly ever played a cliche; he struck notes with a steely precision or a glistening delicacy depending on the mood, and his solos developed in constantly changing phrase lengths and rhythms that never sounded glib or routine."[3]

This article uses material from the article Gordon Beck from the free encyclopedia Wikipedia and it is licensed under the GNU Free Documentation License.