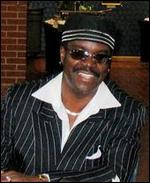 He has been characterized as the best-kept secret of '70s soul, most recently noted in the June 29, 2006 issue of Rolling Stone magazine. He is the father of producer JR Hutson.[1][2][3]

As a teenager, Lee was a member of the Nu-Tones, a four-man vocal group based in New Jersey. They were the premier local group and won several major talent shows during Lee's grammar school years. In addition to Hutson, the members of the Nu-Tones were Ronald King, Bernard Ransom, Ed Davis, and Irving Jenkins.

In 1968, as part of the duo Sugar & Spice, Lee Hutson and Deborah Rollins recorded for Kapp Records. They recorded several singles with some success. Their single "In Love Forever" ranked the "Best New Record Of The Week in the local newspaper column "Soul Sauce". Two other singles recorded were "Ah Ha Yeah" and "Dreams".

It was during those years on campus that Hutson met several people who would later find fame in music and acting Roberta Flack, Herbie Hancock, Debbie Allen, Phylicia Rashad, and Donny Hathaway.

At Howard University, Hutson shared a room with Donny Hathaway for nearly three years. He also joined The Mayfield Singers, a group (including Hathaway) put together on Howard's campus by music legend Curtis Mayfield that performed at New York's famed Apollo Theater and Philadelphia's Uptown Theater. The group released one single for Mayfield in 1967.

There, developing his creative talents, Hutson collaborated with Hathaway on "The Ghetto", giving the late recording star his first hit record in early 1970.

Years with the Impressions

In 1971, three months out of college, Hutson was asked to replace Curtis Mayfield as the lead singer of The Impressions. He stayed with them for two-and-a-half years and recorded two albums with the group, before amicably leaving to pursue his own career as a writer, producer, arranger, and musician.

The first Impressions single to feature Hutson as lead vocalist was entitled "Love Me", released on Curtom Records in North America in June 1971.

In 1973 Hutson wrote, produced, arranged and recorded his first solo album, "Love Oh Love", and through 1992 established himself in a successful recording career, recording eight albums and charting with some thirteen singles in the U.S.[4]

Over a ten-year period from 1973, he developed a cult following on the soul scene, which remains loyal to this day through solo albums for the Curtom label "Love Oh Love", "The Man", "Hutson", "Feel The Spirit", "Hutson II", "Closer To The Source" and "Unforgettable." The "Hutson" album is regarded by some soul collectors as one of the best, most enduring albums of the 1970s. Leroy's last 12" the "Share Your Love EP" was released via the UK's Expansion Records

In 2008, Hutson returned to recording under the name Lee Hutson, issuing an album Soothe You Groove You on his own Triumph label and via download. Two years later, in August 2010, Hutson made his highly anticipated comeback to European stages, performing at Suncebeat Festival in Zadar, Croatia, at Vintage at Goodwood Festival and at Indigo2 in London. He was backed by the British group The Third Degree and the shows were praised by fans and media alike for the high musical quality and authenticity. Hutson plans to record a new album in 2011, sticking to his original 1970s sound.

As a writer/producer, he has worked for Roberta Flack ("Tryin' Times", "Gone Away"), The Natural Four ("You Bring Out the Best in Me", "Can This Be Real"), Linda Clifford, Voices of East Harlem ("Cashing In"), Arnold Blair ("Trying to Get Next to You"), and Next Movement ("Let's Work It Out"), while more recently one of his own cult singles "Lucky Fellow" was covered by Snowboy on Acid Jazz records.

This article uses material from the article Leroy Hutson from the free encyclopedia Wikipedia and it is licensed under the GNU Free Documentation License.