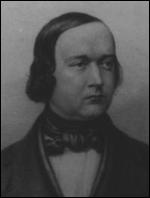 died on 22/2/1849 in Braunschweig, Niedersachsen, Germany

Alexander Ernst Fesca (22 May 1820 in Karlsruhe, 22 February 1849 in Braunschweig) was a German composer and pianist.

Alexander Ernst Fesca was born in Karlsruhe on 22 May 1820, as the second of four sons of composer Friedrich Ernst Fesca (1789–1826) and his wife Charlotte (born Dingelstedt, daughter of the horn player Johann Heinrich Dingelstedt).

Fesca received his first lessons from his father and made his debut at the age of 11 as a pianist in his hometown. At the age of 14 he graduated in composition at the Prussian Academy of Arts in Berlin. His teachers included August Wilhelm Bach (1796–1869), Wilhelm Taubert (1811–1891) and Carl Friedrich Rungenhagen (1778–1851).

In 1838, he returned to Karlsruhe. He got his first success with the operetta "Mariette" in the same year. Fesca was known during his short life mostly through his songs and piano pieces in which his talent is coupled with a certain musical lightness. This is probably also the reason why some music scholars deny "deeper level" and "artistic seriousness" of his works.

In 1841, his opera "The French in Spain" was staged with great success. In the same year, Prince Egon von Furstenberg appointed Fesca as Chamber Virtuoso. From 1842, he settled in Brunswick. In the local court theater on 25 July 1847 was premiered Fescas major work, five-act heroic-romantic opera "Il Trovatore" with a libretto by Frederick Schmetzer.

This article uses material from the article Alexander Fesca from the free encyclopedia Wikipedia and it is licensed under the GNU Free Documentation License.