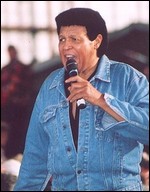 Chubby Checker (born Ernest Evans, October 3, 1941) is an American singer-songwriter. He is widely known for popularizing the twist dance style, with his 1960 hit cover of Hank Ballard's R&B hit "The Twist". In September 2008 "The Twist" topped Billboard's list of the most popular singles to have appeared in the Hot 100 since its debut in 1958, an honor it maintained for an August 2013 update of the list.[1] He also popularized the Limbo Rock and its trademark limbo dance, as well as various dance styles such as the fly.

Ernest Evans was born in Spring Gulley, South Carolina. He was raised in the projects of South Philadelphia, Pennsylvania, where he lived with his parents, Raymond and Mrs. Eartle Evans[2] and two brothers.[3] By age eight Evans formed a street-corner harmony group, and by the time he entered high school, took piano lessons at Settlement Music School. He would entertain his classmates by performing vocal impressions of popular entertainers of the day, such as Jerry Lee Lewis, Elvis Presley and Fats Domino.[4] One of his classmates and friends at South Philadelphia High School was Fabiano Forte, who would become a popular performer of the late 1950s and early 1960s as Fabian Forte.[3]

After school Evans would entertain customers at his various jobs, including Fresh Farm Poultry in the Italian Market on Ninth Street and at the Produce Market with songs and jokes. It was his boss at the Produce Market, Tony A., who gave Evans the nickname "Chubby". The store owner of Fresh Farm Poultry, Henry Colt, was so impressed by Ernest's performances for the customers that he, along with his colleague and friend Kal Mann, who worked as a song-writer for Cameo-Parkway Records,[5] arranged for young Chubby to do a private recording for American Bandstand host Dick Clark. It was at this recording session that Evans got his stage name from Clark's wife, who asked Evans what his name was. "Well", he replied, "my friends call me 'Chubby'". As he had just completed a Fats Domino impression, she smiled and said, "As in Checker?" That little play on words ('chubby' meaning 'fat', and 'checkers', like 'dominoes', being a game) got an instant laugh and stuck, and from then on, Evans would use the name "Chubby Checker".[6]

Checker privately recorded a novelty single for Clark in which the singer portrayed a school teacher with an unruly classroom of musical performers. The premise allowed Checker to imitate such acts as Fats Domino, The Coasters, Elvis Presley, Cozy Cole, and Ricky Nelson, Frankie Avalon, and Fabian Forte as The Chipmunks, each singing "Mary Had a Little Lamb". Clark sent the song out as his Christmas greeting, and it received such good response that Cameo-Parkway signed Checker to a recording contract. Titled "The Class", the single became Checker's first release, charting at #38 in the spring of 1959.

Checker introduced his version of "The Twist" at the age of 18 in July 1960 in Wildwood, New Jersey at the Rainbow Club, "The Twist" went on to become the only single to top the Billboard Hot 100 twice, in two separate chart runs. (Bing Crosby's "White Christmas" had done so on Billboard's earlier chart.)

"The Twist" had previously peaked at #16 on the Billboard rhythm and blues chart, in the 1959 version recorded by its author, Hank Ballard, whose band The Midnighters first performed the dance on stage. Checker's "Twist", however, was a nationwide smash, aided by his many appearances on Dick Clark's American Bandstand, the Top 10 American Bandstand ranking of the song, and the teenagers on the show who enjoyed dancing the Twist. The song was so ubiquitous that Checker felt that his critics thought that he could only succeed with dance records typecasting him as a dance artist. Checker later lamented:

Despite Checker's initial disapproval, he found follow-up success with a succession of up-tempo dance tracks and produced a series of successful dance-related singles, including "The Hucklebuck" (#14), "The Fly" (#7), "Dance the Mess Around" (#24), and "Pony Time", which became his second #1 single. Checker's follow-up "twist" single, "Let's Twist Again", won the 1961 Grammy Award for Best Rock and Roll Solo Vocal Performance. A 1962 duet with Dee Dee Sharp, "Slow Twistin'", reached #3 on the national charts. "Limbo Rock" reached #2 in the fall of 1962, becoming Checker's last Top Ten hit.

Checker is the only recording artist to place five albums in the Top 12 all at once. The performer has often claimed to have personally changed the way we dance to the beat of music, as when he told Billboard, "Anyplace on the planet, when someone has a song that has a beat, they're on the floor dancing apart to the beat. And before Chubby Checker, it wasn't here." Clay Cole agreed: "Chubby Checker has never been properly acknowledged for one major contribution to pop cultureChubby and the Twist got adults out and onto the dance floor for the very first time. Before the Twist dance phenomenon, grownups did not dance to teenage music."

On 12 December 1963 he, by then a millionaire at 22 years old, proposed marriage[7] to Catharina Lodders, a 21-year-old Dutch model and Miss World 1962 from Haarlem, the Netherlands. Checker said he met Miss Lodders in Manila the prior January.[8] They were married on 12 April 1964 at Temple Lutheran Church in Pennsauken, NJ.[9] Their first child, Bianca Johanna Evans, was born in a Philadelphia hospital on 8 December 1966 at 12:36 am weighing 7 pounds, 14 ounces.[10] Checker continued to have Top 40 singles until 1965, but changes in public taste ended his hit-making career. He spent much of the rest of the 1960s touring and recording in Europe. The 1970s saw him become a staple on the oldies circuit, including a temporary stint as a disco artist. Chubby Checker continued to be a superstar in Europe with television and records. In 1963 he appeared on The Chubby Checker Show special in Stockhom Sweden.

His material during his 1960s heyday was recorded for Cameo-Parkway Records and along with the label's other material, became unavailable after the early 1970s because of the company's internal legal disputes. For decades, almost all compilations of Checker's hits consisted of re-recordings. A dance-floor cover version of The Beatles' "Back in the U.S.S.R." was released in 1969 on Buddah Records, but only charted at #82. It was Checker's last chart appearance until 1982 when he hit #92 with "Running".

He also recorded a psychedelic album in the early '70s that was initially only released in Europe. Originally the album was named Chequered!, but was renamed New Revelation in later releases. To this day, Checker dislikes talking about the album.

Despite his mixed feelings towards his biggest hit single, Checker has always been able to capitalize on its enduring popularity. In 1987, he recorded a new version of "The Twist" with rap trio The Fat Boys. The lyrics to this new version implied he was pleased with his association with it. Checker also sang the song in a commercial for Oreo cookies in the early 1990s. In 2008, he performed "The Twist" in venues ranging from the Daytona 500 to The Opie and Anthony Show.

In 2002, Chubby Checker protested to the Rock and Roll Hall of Fame that his hit "The Twist" was not receiving sufficient airplay, claiming that "Peppermint Twist receives more airplay". Seymour Stein, president of the Rock Hall's New York chapter and member of the nomination committee, claimed "I think that Chubby is someone who will be considered. He has in certain years."[11]

In 2008 Chubby Checker's "The Twist" was named the biggest chart hit of all time by Billboard magazine. Billboard looked at all singles that made the charts between 1958 and 2008. He was also honored by Settlement Music School as part of the school's centennial celebration and named to the Settlement 100, a list of notable people connected to the school.[12]

Checker had a single at #1 on Billboard's dance chart in July 2008 with "Knock Down the Walls". The single also made the top 30 on the Adult Contemporary chart. He continues to perform on a regular basis.

In 2009, Checker recorded a public service announcement (PSA) for the Social Security Administration to help launch a new campaign to promote recent changes in Medicare law. In the PSA, Checker encourages Americans on Medicare to apply for Extra Help, "A new 'twist' in the law makes it easier than ever to save on your prescription drug plan costs."[13][14]

On February 25, 2013, Checker released a new single, the inspirational ballad "Changes," via iTunes; it was posted on YouTube on April 28, 2013, and by mid-July had amassed over 26,000 views. He performed it on July 5, 2013, on a Morning Concert on NBC's Today show. Unlike his dance and novelty records, the song showcased Checker as a serious singer.[15]

In 2013, Checker sued HP over a WebOS application with the same name. The application, before being pulled in September 2012, was used to unscientifically estimate penis size from shoe size.[16][17][18][19] The district court said that Checker's trademark claim survived Hewlett-Packard's motion to dismiss, but his other claims were dismissed per Section 230 of the Communications Decency Act.[20]

Chubby performed as well as appeared as a version of himself in Twist Around the Clock (1961) and Don't Knock the Twist (1962). In both films he provided advice and crucial breaks for the protagonist.

He later appeared as himself in the 1989 Quantum Leap episode entitled "Good Morning, Peoria" where he walks into a radio station in 1959 hoping to have his demo record played on the air. The show's main character, Dr. Sam Beckett (Scott Bakula) convinces the station owner to play the song "The Twist", inadvertently teaching Chubby himself how to do The Twist.

In 2001 he again guest-starred as himself singing "The Twist" in season 4 of Ally McBeal.

Checker received the prestigious Sandy Hosey Lifetime Achievement Award on November 9, 2013 from the Artists Music Guild. Checker was the host of the 2013 AMG Heritage Awards and was given the honor during the television broadcast. The award was presented to him by long time friend Dee Dee Sharp.[21]

This article uses material from the article Chubby Checker from the free encyclopedia Wikipedia and it is licensed under the GNU Free Documentation License.