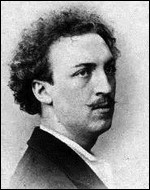 Born in Frederiksberg (near Copenhagen), he studied music with J.P.E. Hartmann and Niels Gade. He wrote his first pieces in his teens, including an unperformed symphony. His family were friends with Hans Christian Andersen, with whom Hamerik would correspond regularly.

Later, he left Denmark in 1862 to study music in Berlin, with Hans von Bülow, and Paris where he was a protégé of Hector Berlioz. It was in 1864 where he began using the more unmistakably Danish version of his last name, rather than Hammerich, in the swell of Danish national feeling after the Danish-Prussian war.

He left Paris in 1869 for Italy, and then Vienna. In 1871 he was offered the post of director of the Peabody Institute in Baltimore, Maryland, where his influence won praise from influential visitors including Tchaikovsky and Arthur Sullivan.[1] He composed most of his large scale concert works for the Institute's orchestra. He left his position as director of the Peabody in 1898. He eventually returned to Denmark in 1900, with his American pianist wife, born Margaret Williams, but had essentially retired. He would sit on competition boards and conduct, including his own works.

He has 41 opus numbers, including seven symphonies, chamber music, four operas, five orchestral suites and popular orchestral music, much of it based on Scandinavian folk tunes. During his lifetime he was considered the best-known Danish composer after Gade, and one that was primarily influenced by Berlioz. His Requiem was his most successful work, and the one he considered his best.

His son Ebbe Hamerik was a conductor and composer, and his daughter Valdis Hamerik an opera singer.

While relatively obscure today, Hamerik was an influential teacher in the US, as the director of the Peabody in Baltimore for over a quarter of a century, and his works were performed in both the United States and Europe. The most obvious influence in his music is Berlioz - particularly his conscious choice of rooting his music in French influences, the French subtitles to his symphonies and the use of an ideé fixe. His music is often described as having a "Nordic" cast, and in letters he told friends that even though he was going to America he would always remain a Dane.

His later work incorporates influences from composers such as Paul Dukas and César Franck and the more roving harmony and extended tonality, including movements in different keys, expanded use of vagrant chords. His Seventh Symphony has been compared with Mahler's works from the same period, involving hundreds of musicians in its first performance in Baltimore, which was directed by fellow von Bülow student Joseph Pache.

This article uses material from the article Asger Hamerik from the free encyclopedia Wikipedia and it is licensed under the GNU Free Documentation License.

Ludwig van Beethoven Allegro con brio aus der Sinfonie Nr. 5 c-moll op. 67
Update Required To play the media you will need to either update your browser to a recent version or update your Flash plugin.