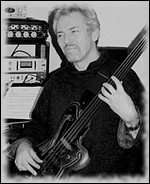 In recent times Giblin has moved further in the direction of acoustic bass, and current projects include among the musicians, drummer Peter Erskine (of Weather Report), and pianist Alan Pasqua (of Tony Williams Lifetime).

This article uses material from the article John Giblin from the free encyclopedia Wikipedia and it is licensed under the GNU Free Documentation License.

Emmanuel Chabrier Habanera
Update Required To play the media you will need to either update your browser to a recent version or update your Flash plugin.