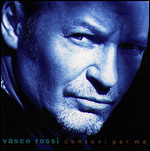 Vasco Rossi (born 7 February 1952), also known as Vasco or with the nickname Il Blasco, is an Italian singer-songwriter. During his career, he has published 30 albums (not including unofficial releases) and has written over 250 songs, as well as lyrics for other artists. He calls himself a "provoca(u)tore" (an Italian portmanteau for "provoking author") as throughout his career he has been regularly criticized over his choice of lifestyle and the lyrics in his songs. With more than 35 millions of copies sold, he is one of the best-selling Italian singers.

Vasco Rossi was born in Zocca, in the province of Modena (Emilia-Romagna). His father, Carlo Rossi, was a truck-driver, and his mother, Novella, a housewife. It was his mother herself who decided to enroll him in singing school when he was a little boy, a choice that must have seemed rather peculiar within the mentality of a small village in the Apennines like Zocca. Nonetheless, Rossi fell in love with music and at the age of 14 began playing with his first band.

Rossi and his family moved to Bologna, Italy, where he studied accounting in high school. Upon graduating he opened a music club, Punto Club, and enrolled in university at the faculty of Economics and Business. In the meantime he supported himself by working as a DJ and founding, along with friends, one of the first private radio stations in Italy, "Punto Radio", with which he began slowly and timidly showcasing his own songs.

Encouraged by his friend Gaetano Curreri (now leading member of Italian rock band Stadio), Rossi released his first EP on 13 June 1977, which included the songs "Jenny è pazza" (Jenny is crazy) and "Silvia", and a full-length album in 1978, Ma cosa vuoi che sia una canzone ("What do you think a song is"). In 1979, he released a second album, Non siamo mica gli americani ("We're not like the Americans"), which included, "Albachiara" ("Cleardawn"), one of his biggest hits, and a ballad considered emblematic of Rossi's poetic style. His most controversial album, Colpa d'Alfredo ("Alfredo's fault") followed in 1980; its title-track was censored from the radio and let loose bitter criticism because it contained some lyrics referring to women considered too explicit at that time. The controversy actually increased Rossi's popularity, and he quickly saw himself famous on a national level, particularly after performing live on Domenica In, a popular Italian television program. The performance did not particularly please journalist Nantas Salvalaggio, who published a scathing article against Rossi calling him a drug addict. Rossi argued that Salvalaggio evidently did not understand his music and remarked how easy it is to criticize a still unknown artist who cannot defend himself.

In 1981, the album Siamo solo noi ("It's only us") was released. The title track, another signature song of his, would become commonly recognized as a generational hymn.

In 1982, Rossi took part for the first time in the Sanremo Music Festival, performing the song "Vado al massimo" ("I'm taking it to the max"). Here, he once again found himself under harsh criticism, and came in last place in the festival. In April of the same year the album Vado al Massimo was released. The following year, he reappeared at the Sanremo Music Festival, this time performing "Vita spericolata" (Daredevil Life), probably his most popular song, and finishing in second-to-last place due to his apparent state of intoxication. The following album, Bollicine ("Little Bubbles"), published in 1983, was his sixth in seven years, and was the album that consecrated him definitively as an idol of the new generation and an icon of Italian rock. The title track, whose lyrics are about Coke (but also demonstrate a clear assonance with cocaine), won the Festivalbar '83, and his tour that year was an enormous success.

To celebrate this positive period in his career, Rossi released his first live recording in 1984, Va bene, va bene così ("It's alright, it's alright this way"). In April, however, he was arrested on charges of drug possession. He was immediately granted provisional release from jail, but subsequently sentenced to 2 years and eight months of probation. Shortly thereafter he released his next album, Cosa succede in città ("What's going on in the city"), which became one of his weakest critically and did not reach past sales.

In 1987 Vasco Rossi's ninth album, C'è chi dice no ("There Are Some Who Say 'No'"), was released; the ever-increasing numbers of fans showing up to his concerts forced him to quit performing in clubs and normal-sized venues and begin the era of something for which he is known to this day—playing in and selling out big arenas and stadiums.

His tenth studio album, Liberi liberi ("[we are] Free, Free"), followed in 1989. The success of his 1989 tour brought the release of the live album Fronte del palco (a pun on the Italian title of Marlon Brando's film "Waterfront" which was "Fronte del porto", and thus meaning "Stage Front") and the organization of two concerts in 1990, one at the San Siro stadium in Milan and the other at the Flaminio in Rome.

Rossi's next album, Gli spari sopra ("The shots above"), released in 1993, went ten times platinum. The title track, which was a major hit, is a cover version of Celebrate by the Irish band An Emotional Fish. In 1994, he gave the unreleased "Senza Parole" ("Without Words") as a gift to members of his official fan-club.

In 1995, Rossi was again the star at San Siro with a double concert, Rock sotto l'assedio ("Rock under siege"), which protested the war in Bosnia and Herzegovina. Rossi invited a few Bosnian bands like Sikter, Lezi Majmune, and Protest to perform but was heavily criticized by the press because the proceeds weren't given to charity, despite the fact they were never meant to be.

In 1998, Rossi rediscovered his singer-songwriter side, recording and releasing the album Canzoni per me ("Songs for me") with a softer and less "rock" sound, even remaking never-published songs written at the beginning of his career. The nature of the songs, however, did not impede Rossi from winning his second Festivalbar with the song, "Luna per te" ("Moon for you"). Given the low propensity of these songs to fit in his live show with the songs his fans had up to that time become accustomed to, he decided to hold just one concert in 1998, accepting the offer to be a guest star on the first evening of the new Heineken Jammin' Festival in Imola, Italy. The evening is immortalized in both video and in the 1999 live album Rewind. A few days into the tour, Rossi's inseparable friend, as well as guitarist and writer/cowriter of many songs and lyrics, Massimo Riva, died unexpectedly. He would be remembered and celebrated by Rossi and fans in nearly every concert that followed.

In 2001, Stupido Hotel ("Stupid Hotel"), was released, and Rossi won his third Festivalbar, this time with the song "Siamo Soli" ("We are alone"). In 2002 Rossi released his first official recording of remastered songs in their original version, Tracks, which was followed by three sold-out performances at San Siro Stadium in Milan. His album Buoni o cattivi ("Good or Bad Ones") was the most successful album in Italy in 2004.

On 12 May 2005, Milan's IULM conferred an honorary degree in Communication Sciences to Vasco Rossi.

On 9 September 2005, Rossi released the double DVD È solo un Rock'n'Roll show ("It's Only a Rock'n’Roll Show") with Andrea Lehotská, launching the concept of the 'movieclip,' in which all the songs from Buoni o cattivi (Good or Bad [guys])' are used in a 2-hour music video. Three months later, Buoni o cattivi live anthology 04.05 was released, a comprehensive box set comprising a double CD and a triple DVD, recorded live from the record-setting Buoni o cattivi tour of 2004 and 2005. In December 2005 he returned to his home town of Zocca, where his childhood friends and the rest of the community organized a tribute in his honor, including a photo display and other celebrations.

In 2007, he released the "Vasco Extended Play", that contains the hit single "Basta Poco" ("A Little Is Enough"). The EP topped the Italian FIMI Charts for 21 Weeks, making that the Italian best-selling single of 2007.

On 4 May 2010, the newspaper Corriere della Sera reported Vasco Rossi as saying the American and British governments had been responsible for preventing him and other Italian musicians from becoming known in those countries. "Just as Bob Dylan was banned from playing in China, for 20 years I was barred from London. ... It's one of the many 'presents' that America left us after World War II. To favour the sale of American and British music to Italy and discourage the export of our talents abroad."[1]

On 4 November he released a new album, Sono innocente (I'm innocent). The disc was preceded by the single "Come vorrei" (How I would like to). During the recording session for the new album, Vasco wrote the lyrics to a song musically written by Dave Grohl, entitled "Sognare ancora" (Dreaming Again). This particular song was included in a compilation for Dave Grohl's music project.

In June 2011 Rossi announced he would be retiring from touring and live work although would continue to work in the music business. [2]

In January 2013 Rossi withdrew his resignation and announced a new tour in Turin and Bologna, followed by tours: Vasco Live Kom '014, Vasco Live Kom '015, Vasco Live Kom '016, and the huge concert to celebrate his 40 years of career, on July the 1st 2017, held in Modena and called Modena Park. The Modena Park 2017 is currently the largest concert with over than 225,000 tickets sold, breaking other world records.

During 2011, Vasco's lawyers threatened to undertake legal actions against popular Italian satire website Nonciclopedia, the Italian version of Uncyclopedia, arguing that the rock star was offended by the contents of the page about him. On 3 October 2011 the website shut down after repeated inquiries from the police to the site's admins. The news promptly ran across the web via thousands of tweets, blogposts and eventually spread on some Italian newspapers.[3][4]

This article uses material from the article Vasco Rossi from the free encyclopedia Wikipedia and it is licensed under the GNU Free Documentation License.