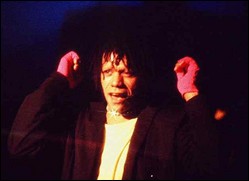 Joseph Martin Leeway (born 15 November 1955, Islington, London[1]) is the former multi-instrumentalist, and stylings guru, for the 1980s band, the Thompson Twins. Leeway joined the Thompson Twins in 1980 after being one of their roadies.

He was born to an Irish mother and Nigerian father, but was fostered to an English family in Dartford, Kent, from the age of two. At college he took English and Drama, then he began teaching English, which was how he met Tom Bailey. He joined a theatre group in Cardiff after failing to establish his own company. He spent a year with the Young Vic theatre before joining the Thompson Twins as a roadie at Tom Bailey's invitation.

Playing bongos and congas, he appeared on the Thompson Twins debut record album, A Product of .... By the time the band recorded their second album Set in 1982, Leeway had begun contributing to the songwriting process, and he wrote a pair of songs for the album completely on his own and sang lead on three tracks.

At that time in 1982, the Thompson Twins underwent a radical change in line-up. Previously an ever-changing lineup of musicians that featured seven members at the time of Set, band leader Tom Bailey reduced the band to a trio by firing everybody except Alannah Currie and Leeway. Leeway's main role in the new trio was to assist in writing the songs, contribute background vocals and design the band's stage shows. Leeway's background in theatre made him an obvious and well-suited choice for the latter, and the live shows of the band were always met with success and critical acclaim.

The Thompson Twins enjoyed at least three solid years of worldwide commercial success, beginning with the 1983 album Quick Step and Side Kick (released in the United States as simply Side Kicks) followed by Into the Gap, which garnered critical acclaim and lucrative international sales, and Here's To Future Days.

After these three albums, their contract with Arista Records was up for renewal and after the extensive world tour following the release of the album, Leeway chose to leave the band for a number of personal reasons, mostly due to difficulties with The Twins management. However, the split from the rest of the trio was amicable.

After leaving the band, Leeway dabbled in solo work. He recorded a demo tape of original material, but ultimately an album never materialized. He appeared in the 1989 film, Slaves of New York as Johnny Jalouse. Leeway's part in the film was originally a prominent supporting character, but this was changed when most of his scenes were cut. The actress that Leeway had filmed most of his scenes with was fired from the film and their scenes together were cut. Leeway can still be seen in the film singing one of his original songs with an all-female band.

The experience with Slaves of New York seemed to stall Leeway's career as an actor permanently, but he continued to work in sound design for films as well as commercials for Nike and Pepsi.

As of 2006, Leeway resides in Los Angeles, California, and works in the field of hypnotherapy. He is on the staff at the Hypnosis Motivation Institute (HMI) in Tarzana, California, and is also a certified trainer in neuro-linguistic programming.

This article uses material from the article Joe Leeway from the free encyclopedia Wikipedia and it is licensed under the GNU Free Documentation License.