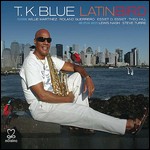 T.K. Blue (also known as Talib Kibwe, born Eugene Rhiney)[1] is an American jazz saxophonist from New York City. His parents were Jamaican and Trinidadian, and he has used their Afro-Caribbean musical styles in his own work. He has worked with, among others, Don Cherry and the South African pianist Dollar Brand.

T.K. Blue began his life in music from his Lakeview, Long Island, hometown by playing trumpet from ages 8 to 10, and then switching to drums for a year. After a hiatus, at the age of 17 he dedicated himself to music by learning flute. While attending New York University between 1971 and 1975 with a double major in Music and Psychology,[2] Blue threw himself headlong into music, concentrating on the saxophone. He took lessons (as part of the Jazzmobile program) with Jimmy Heath, Frank Foster and Ernie Wilkins, as well as from tenor legend Billy Mitchell. During these undergraduate years, T.K. lived in the East Village, partaking in the full range of the scene, from lessons with elders to deep involvement in the avant-garde. In 1979 Blue received his Master's in Music Education from Columbia University.

After performing and traveling extensively with Abdullah Ibrahim (Dollar Brand) from 1977 to 1980, T.K. moved to Paris in December 1981, remaining there until 1989. In 1986 he recorded Egyptian Oasis, his first record as a leader, and that sparked a number of State Department tours to some 20 countries in Africa.

Back in the USA since 1990, T.K. has worked constantly, in a wide range of styles and situations, and recorded his second CD, Introducing Talib Kibwe, released on Evidence in 1996. Augmenting his long-term relationships as Musical Director with pianist Randy Weston[2] and with the Spirit of Life Ensemble, recent affiliations include: Odadaa, a group led by a drummer from Ghana, Yacub Addy; percussionist Norman Hedman's pan-African band Tropique; tap dancer Joseph's Tap and Rap, to jazz tunes by Charlie Parker and John Coltrane; and emerging singer Jeffrey Smith.

T.K. was part of the historic June 2008 photo session called "A Great Day In Paris" (in homage to Art Kane's 1958 photograph A Great Day in Harlem) that featured more than 50 musicians from the USA who resided there.[3]

With Jayne Cortez and The Firespitters

With The Spirit of Life Ensemble

This article uses material from the article T. K. Blue from the free encyclopedia Wikipedia and it is licensed under the GNU Free Documentation License.