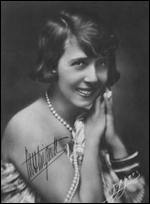 Mistinguett (5 April 1875 – 5 January 1956) was a French actress and singer, whose birth name was Jeanne Florentine Bourgeois. She was at one time the best-paid female entertainer in the world.[1]

The daughter of Antoine Bourgeois, a 30-year-old day-laborer, and Jeannette Debrée, a 21-year-old seamstress, Jeanne Bourgeois was born at 5 Rue du Chemin-de-Fer (today Rue George-Israël), in Enghien-les-Bains, Val-d'Oise, Île-de-France, France. The family moved to Soisy-sous-Montmorency where she spent her childhood; her parents later worked as mattress-makers.[2][3]

At an early age Bourgeois aspired to be an entertainer. She began as a flower seller in a restaurant in her hometown, singing popular ballads as she sold blossoms. After taking classes in theatre and singing, she began her career as an entertainer in 1885. One day on the train to Paris for a violin lesson, she met Saint-Marcel, who directed the revue at the Casino de Paris. He engaged her first as a stage-hand, and here she began to pursue her goal to become an entertainer, experimenting with various stage-names, being successively Miss Helyett, Miss Tinguette, Mistinguette and, finally, Mistinguett.[4]

Bourgeois made her debut as Mistinguett at the Casino de Paris in 1895 and went on to appear in venues such as the Folies Bergère, Moulin Rouge and Eldorado. Her risqué routines captivated Paris, and she went on to become the most popular French entertainer of her time and the highest paid female entertainer in the world, known for her flamboyance and a zest for the theatrical.[1] In 1919 her legs were insured for 500,000 francs.

Though Mistinguett never married, she had a son, Léopoldo João de Lima e Silva, by Brazilian diplomat Leopoldo de Lima e Silva (died 1931); the latter was a grandson of the Duke of Caxias.[3] She also had a long relationship with Maurice Chevalier, 13 years her junior.

She first recorded her signature song, "Mon Homme", in 1916. It was popularised under its English title "My Man" by Fanny Brice and has become a standard in the repertoire of numerous pop and jazz singers.

During a tour of the United States, Mistinguett was asked by Time magazine to explain her popularity. Her answer was, "It is a kind of magnetism. I say 'Come closer' and draw them to me."

Mistinguett died in Bougival, France, at the age of 80, attended by her son, a doctor.[3][5] She is buried in the Cimetiere Enghien-les-Bains, Île-de-France, France.

Upon her death, writer Jean Cocteau observed in an obituary, "Her voice, slightly off-key, was that of the Parisian street hawkersthe husky, trailing voice of the Paris people. She was of the animal race that owes nothing to intellectualism. She incarnated herself. She flattered a French patriotism that was not shameful. It is normal now that she should crumble, like the other caryatids of that great and marvelous epoch that was ours".[3]

Paris Journal was written by Janet Flanner, Paris writer for the New Yorker, 1925-1975.

This article uses material from the article Mistinguett from the free encyclopedia Wikipedia and it is licensed under the GNU Free Documentation License.