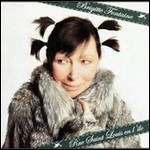 born in 1940 in Morlaix, Bretagne, France

Brigitte Fontaine, born in 1939 in Morlaix in the Brittany region of France, is a singer of avant-garde music.[1][2] During the course of her career she has employed numerous unusual musical styles such melding rock and roll, folk, jazz, electronica, spoken word poetry and world rhythms. She has collaborated with such celebrated musicians as Stereolab, Michel Colombier, Jean-Claude Vannier, Areski Belkacem, Gotan Project, Sonic Youth, Antoine Duhamel, Grace Jones, Noir Désir, Archie Shepp, Arno and The Art Ensemble of Chicago. She is also a novelist, writer, actress, playwright, and poet.

The daughter of two teachers, Brigitte Fontaine developed her taste for writing and drama very early. She spent her childhood in small villages of Finistère, then in Morlaix. At 17 years old, she moved to Paris in order to become an actress.

In 1963, she turned to singing and appeared in several Parisian theatres, interpreting her own works. In 1964, she opened for Barbara and George Brassenss show at the Bobino. Even so, she did not give up theatre. With Jacques Higelin and actor Rufus, she created the play Maman j'ai peur ("Mom I am afraid"), which played first at the Vieille-Grille theatre, and then at the Théâtre des Champs-Elysées. It met with such a critical and popular success that it stayed in Paris for more than two seasons and toured throughout Europe.

In 1965 and then in 1968, she made two albums, one jazz and one avant-pop, as well as two 45s with Jacques Higelin. In 1969, she began what would be a long collaboration with Kabyle musician Areski Belkacem. With Belkacem and in the company of Higelin, she conceived Niok, an innovative spectacle of theatre and song, for the Lucernaire theatre. Soon after, Fontaine wrote a series of works in free verse and prose which comprised the show Comme à la radio at the Théâtre du Vieux-Colombier before being turned into an album. Recorded with The Art Ensemble of Chicago, this album marks a clean break with traditional French songs, building the first bridges to world music.

Brigitte Fontaine became a major figure in the French underground. In a half-dozen albums, the majority of which were released through the independent label Saravah, Fontaine explored different poetic worlds. She renounced the use of rhyme, and using talk-over sometimes, she recorded, with very little means and often on two tracks, songs which addressed topics with humour or gravity, according to the mood, as various as death ("Dommage que tu sois mort"), life ("Lété, lété"), alienation ("Comme à la radio"), madness ("Ragilia"), love ("Je taimerai"), social injustice ("Cest normal"), the inequality of the sexes ("Patriarcat") and racism ("Y' a du lard"). However, she also knew how to make light of herself ("L'Auberge (Révolution)").

Because they sail among pop, folk, electro and world music, the albums Lincendie and Vous et nous by the Areski-Fontaine duo figure among the most unclassifiable records of the French scene. Almost thirty years later, the international audience of these LPs (since re-edited for CD) is comparable to that of the cult record Histoire de Melody Nelson by Serge Gainsbourg and Jean-Claude Vannier, notably due to the enthusiastic remarks made by members of the band Sonic Youth in the Anglo-Saxon press.

The 1980s were a period of silence, musically speaking, for Brigitte Fontaine and her partner Areski Belkacem. Far from the recording studio, she devoted herself to writing and the theatre. Always active, she appeared onstage in Quebec, she performed her play Acte 2 in a grand tour of the French-speaking world, interpreted Les Bonnes by Jean Genet in Paris, and published a novel (Paso doble) as well as a collection of short stories (Nouvelles de lexil). In 1984, she recorded a single ("Les Filles daujourdhui").

After having given a series of concerts in Tokyo and other large Japanese cities, she had to wait about five years for a French company to distribute her new album French Corazon (written and composed in 1984 but released in 1988 in Japan). Having been broadcast notably on French television, the video for the single "Le Nougat", directed by comics artist Olivia Tele Clavel, prepared the public for the big return of the singer to the French stage which commenced with a concert in 1993 at the Bataclan.

In the 1990s, Brigitte Fontaine moved closer to the musical worlds of Björk and Massive Attack by testing new, more electric musical forms and, especially, more electronic forms than before. Her lyrics mark a return to a more classical, versified form. The release of her album Genre humain, in 1995, met with great success (more so on the part of the critics than the general public) with surprising titles like "Conne" (produced by Étienne Daho), lyric titles like "La Femme à barbe" (produced by Les Valentins), and poetic ones like "Il se mêle à tout ça" (produced by Yann Cortella and Areski Belkacem).

In 1997, while she published a new novel (La Limonade bleue), she recorded Les Palaces and its landmark track "Ah que la vie est belle!". The album, very well received by the press, is enriched by the collaboration of Areski Belkacem, Jacques Higelin and Alain Bashung.

Her albums Kékéland (2001) and Rue Saint-Louis en l'île (2004) benefited from prestigious collaborations with artists such as Noir désir (with whom she also co-wrote and recorded the 23-minute track L'Europe on des Visages des Figures[3]), Sonic Youth, Archie Shepp, - M-, Gotan Project, Zebda, etc. In 2005, after having given a series of concerts with her usual band (but also with La Compagnie des musiques à ouïr), she published a new novel, La Bête curieuse, whose erotic ambiance somewhat foretold the tonality of her sixteenth album, Libido (2006). This new album renewed her concerts with a lively energy and gave them a very "baroque 'n' roll" ambiance, in which Teresa of Avila, Sufis, Hollywood films, and Melody Nelson are invoked.

In October 2006, Fontaine appeared at the Barbican Centre in London along with Jarvis Cocker, Badly Drawn Boy and other English artists, for the first public interpretation of the mythic "Histoire de Melody Nelson". In January 2007, she appeared onstage with graphic novelist Blutch at the Angoulême International Comics Festival. On 29 March 2007, she invested in the Olympia music hall, supported by her friends Jacno, Arthur H, Christophe, Anaïs, Jacques Higelin, Maya Barsony and Jean-Claude Vannier. In April, she played at the Printemps de Bourges music festival and participated in her Québécois admirer Pierre Lapointe's concert for a duo of "La symphonie pastorale". After having given a series of intimate concerts all through September on a barge anchored under the Pont des Arts on the Seine river in Paris, Fontaine toured throughout France. Between two concerts, she went into the studio with Olivia Ruiz to record a new single, "Partir ou rester", for which she wrote the lyrics.

In February 2008, she published a new novel, Travellings, published by Flammarion, while Benoît Mouchart devoted a monograph to her ("Brigitte Fontaine, intérieur/extérieur"), published by Panama. A new album titled Prohibition and produced by Ivor Guest including collaborations with Grace Jones and Philippe Katerine is programmed for a release in the fall of 2009. The lyrics of this new work mark the return of Brigitte Fontaine to an anti-authority political position.

In March 2011 Polydor published her new album, also produced by Ivor Guest. It is entitled L'un n'empêche pas l'autre, and consists of duets and solos. It contains ancient songs and also some new tracks, including 'Dancefloor' (Feat. Grace Jones), which Polydor uploaded on their site.

This article uses material from the article Brigitte Fontaine from the free encyclopedia Wikipedia and it is licensed under the GNU Free Documentation License.

Joseph Haydn Adagio aus der Klaviersonate e-moll
Update Required To play the media you will need to either update your browser to a recent version or update your Flash plugin.