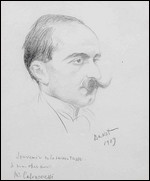 Calvocoressi was born in France of Greek parents. At first, he studied law at the Lycée Janson de Sailly, and then studied music at the Conservatoire de Paris with Xavier Leroux. He became friends with Maurice Ravel.[1] As a talented polyglot, Calvocoressi began a career in 1902 as a music critic and correspondent for several English, American, German and Russian periodicals.[1] He also translated song texts, opera librettos and books from Russian and Hungarian into French and English.[1] His subject of his first book was Liszt, but he was a strong proponent of Mussorgsky and other Russian musicians.

Calvocoressi lectured at the Ecole des Hautes Etudes Sociales from 1905 to 1914, teaching about contemporary music. At the onset of World War I, the Greek Calvocoressi found himself unable to serve the French cause. He moved to London an served as a cryptographer.[1] He spent the rest of his life in England, was naturalized, married an English citizen, and wrote the remainder of his books in English.[1] Calvocoressi was a member of the Apaches music society.

Calvocoressi's legacy as a music critic and translator was his advocacy for Russian music. He wrote three books on Modest Mussorgsky. He was the French advisor for Sergei Diaghilev as Diaghilev was introducing Russian arts to the French.[1]

This article uses material from the article Michel-Dimitri Calvocoressi from the free encyclopedia Wikipedia and it is licensed under the GNU Free Documentation License.

Johann Baptist Cramer Larghetto und Rondo aus dem Klavierkonzert E-Dur Nr. 7 op. 56
Update Required To play the media you will need to either update your browser to a recent version or update your Flash plugin.