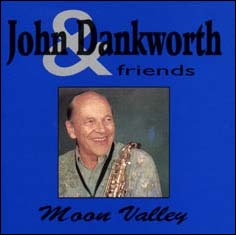 Born in Woodford, Essex, he grew up, within a family of musicians, in Highams Park, a suburb of Chingford, and attended Selwyn Boys' (Junior) School in Highams Park and later Sir George Monoux Grammar School in Walthamstow. He had violin and piano lessons before settling eventually on the clarinet at the age of 16, after hearing a record of the Benny Goodman Quartet. Soon afterwards, inspired by Johnny Hodges, he learned to play the alto saxophone.

After studying at London's Royal Academy of Music (where his jazz interests were frowned upon) and then national service in the Royal Air Force, during which he played alto sax and clarinet for RAF Music Services, he began a career on the British jazz scene. He attended the Paris Jazz Festival in 1949 and played with Charlie Parker. Parker's comments about Dankworth led to the engagement of the young British jazz musician for a short tour of Sweden with the soprano-saxophonist Sidney Bechet. Dankworth was voted Musician of the Year in 1949.

In 1950, Dankworth formed a small group, the Dankworth Seven, as a vehicle for his writing activities as well as a showcase for several young jazz players, including himself (alto sax), Jimmy Deuchar (trumpet), Eddie Harvey (trombone), Don Rendell (tenor sax), Bill Le Sage (piano), Eric Dawson (bass) and Tony Kinsey (drums). Vocalist and percussionist Frank Holder also sang and recorded with this ensemble. After three successful years, the group was wound up, although it re-formed for several reunions over the years.

Dankworth formed his big band in 1953. The band was soon earning plaudits from the critics and was invited to the 1959 Newport Jazz Festival. The New York Times critic said of this appearance "Mr. Dankworth's group ... showed the underlying merit that made big bands successful many years ago – the swinging drive, the harmonic colour and the support in depth for soloists that is possible when a disciplined, imaginatively directed band has worked together for a long time. This English group has a flowing, unforced, rhythmic drive that has virtually disappeared from American bands". The band performed at the Birdland jazz club in New York City, and shortly afterwards shared the stage with the Duke Ellington Orchestra for a number of concerts. Dankworth's band also performed at a jazz event at New York's Lewisohn stadium where Louis Armstrong joined them for a set. By now, Cleo Laine's singing was a regular feature of Dankworth's recordings and public appearances. After her divorce from George Langridge became final, in 1957, Dankworth married Cleo in secret at Hampstead Registry Office in 1958. The only witnesses at the wedding were Johnny's friend, pianist Ken Moule, and arranger David Lindup.

In 1959, Dankworth became chair of the Stars Campaign for Inter-Racial Friendship, set up to combat the fascist White Defence League.[6]

In 1961, Dankworth's recording of Galt MacDermot's "African Waltz" reached the UK Singles Chart, peaked at No. 9, and remained in the chart for 21 weeks.[7] American altoist Cannonball Adderley sought and received Dankworth's permission to record the arrangement and had a minor hit in the US as a result. The piece was also covered by many other groups. In 1967 drummer Ronnie Stephenson's part on "African Waltz" was adapted by the Jimi Hendrix Experience's Mitch Mitchell to form the basis of the drum part on "Manic Depression".[8]

Dankworth's friendship with trumpeter Clark Terry led to Terry's being a featured soloist on Dankworth's 1964 album The Zodiac Variations, together with Bob Brookmeyer, Zoot Sims, Phil Woods, Lucky Thompson and other guests. Other Dankworth recordings during this period featured many other respected jazz names. Some were full-time members of the Dankworth band at one time or another, like Tony Coe, Mike Gibbs, Peter King, Dudley Moore, George Tyndale, Daryl Runswick, John Taylor and Kenny Wheeler, while others such as Dave Holland, John McLaughlin, Tubby Hayes and Dick Morrissey were occasional participants.

Dankworth began a second career as a composer of film and television scores (often credited as "Johnny Dankworth"). Among his best-known credits are the original themes for two British TV programmes, The Avengers (used from 1961 to 1964) and Tomorrow's World. He also wrote the scores for the films Darling (1965) and Modesty Blaise and Morgan: A Suitable Case for Treatment (both 1966).[9] He appeared in the film All Night Long (1962) alongside Dave Brubeck and Charles Mingus – playing himself - and played on the theme to the satirical BBC show The Frost Report in 1966.

Dankworth was commissioned to write a piece for the 1967 Farnham Festival; and produced "Tom Sawyer's Saturday"; written for full orchestra and narrator: "a sort of 'Peter and the Wolf' which could be played by most reasonably competent youth orchestras".[10]

During this active period of recording, the Dankworth band nevertheless found time for frequent live appearances and radio shows, including tours in Britain and Europe with Nat King Cole, Sarah Vaughan and Gerry Mulligan, and concerts and radio performances with Lionel Hampton and Ella Fitzgerald.

Dankworth's friendship with Duke Ellington continued until the latter's death in 1974. He recorded an album of symphonic arrangements of many Ellington tunes featuring another Ellingtonian trumpet soloist Barry Lee Hall. Dankworth also retained his Ellington links by performing with the Ellington Orchestra under the direction of Duke's son, Mercer Ellington. Dankworth recorded various symphonic albums with Dizzy Gillespie and the Rochester Philharmonic Orchestra and others. Other jazz musicians with whom Dankworth performed include George Shearing, Toots Thielemans, Benny Goodman, Herbie Hancock, Hank Jones, Tadd Dameron, Slam Stewart and Oscar Peterson.

He always had an enthusiasm for jazz education, for many years running the Allmusic summer schools at the Stables in Wavendon near Milton Keynes, a theatre that Cleo and he created (January 1970) in their back garden. From 1984 to 1986, Dankworth was professor of music at Gresham College, London, giving free public lectures.

In 1982, Dankworth was awarded an Honorary Doctorate of Music from Berklee College of Music. [11]

He appeared with Craig David on Later with Jools Holland on BBC Two. He set up his own record label, Qnotes, in 2003, to reissue some of his old recordings as well as new ones. They include a number with Julian Lloyd Webber, Dudley Moore and members of his family.

Dankworth and Laine's two children are both jazz musicians: Alec Dankworth is a bassist who is also a member of his father's band, and Jacqui Dankworth is a singer.

Dankworth was made a Knight Bachelor in the 2006 New Year's Honours List.[12] He and Dame Cleo Laine were one of the few married couples where both partners held titles in their own right.

Sir John remained an active composer into later life, and he wrote a jazz violin concerto for soloist Christian Garrick to play. This work had its world premiere at the Nottingham Royal Concert Hall on 3 March 2008 in partnership with the Nottingham Youth Orchestra.[13] Sir John himself took to the stage and challenged the young players to improvise with him.

In October 2009 at the end of a US tour with his wife, Sir John was taken ill. The couple cancelled a number of UK concert dates for the following month. Dankworth did return to the concert stage for just one solo at the London Jazz Festival at the Royal Festival Hall, London, in December 2009. He played his sax from a wheelchair. He also played in John & Cleo's Christmas Show from 17 to 20 December 2009 at 'the Stables' in Wavendon. He died on 6 February 2010, aged 82,[14] on the afternoon before a show celebrating the 40th anniversary of the foundation of his Stables theatre.[15]

His funeral took place on 1 March 2010 at Milton Keynes Crematorium, followed by a memorial service held at the Stables the same day.

This article uses material from the article John Dankworth from the free encyclopedia Wikipedia and it is licensed under the GNU Free Documentation License.

Ernest Chausson Sicilienne aus Concerto für Klavier, Violine und Streicher op. 21
Update Required To play the media you will need to either update your browser to a recent version or update your Flash plugin.