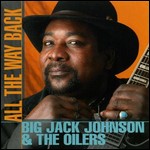 Johnson was born in Lambert, Mississippi in 1940.[2] His father was a country and blues musician. Johnson started playing with him, but in his teens shifted to an electric guitar. In 1962, Johnson joined with Sam Carr and Frank Frost to form The Jelly Roll Kings and The Nighthawks.[3] Johnson's first recordings as a vocalist appeared on the 1979 album Rockin' the Juke Joint Down, on Earwig Music. With Frost as the bandleader, they performed and recorded together for 15 years.[4]

He has recorded both solo and as a member of the blues groups the Jelly Roll Kings[2] and Big Jack Johnson and the Oilers (with poet/musician Dick Lourie). Johnson's album for Earwig, The Oil Man (1987), includes "Catfish Blues."[4]

Johnson died from an undisclosed illness on March 14, 2011.[6] According to family members, he had struggled with health issues in his final years, worsening to the point that there were erroneous reports of his death several times in the weeks prior to his death.

This article uses material from the article Big Jack Johnson from the free encyclopedia Wikipedia and it is licensed under the GNU Free Documentation License.

Tomaso Albinoni Concerto B-Dur für Oboe, Streicher und Basso continuo op. 7 Nr. 3
Update Required To play the media you will need to either update your browser to a recent version or update your Flash plugin.