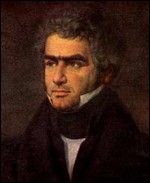 Ferdinand Ries (28 November 1784 [baptised] – 13 January 1838) was a German composer. Ries was a friend, pupil and secretary of Ludwig van Beethoven. He composed eight symphonies, a violin concerto, eight piano concertos, three operas, and numerous other works in many genres, including 26 string quartets. In 1838 he published a collection of reminiscences of his teacher Beethoven, co-written with Franz Wegeler. The symphonies, some chamber works —most of them with piano— his violin concerto and his piano concertos have been recorded, demonstrating a style which is, unsurprising due to his connection to Beethoven, somewhere between those of the Classical and early Romantic eras.

Ries was born into a musical family of Bonn. His grandfather, Johann Ries (1723–1784), was appointed court trumpeter to the Elector of Cologne at Bonn. Ries was the eldest son of the violinist and Archbishopric Music Director Franz Anton Ries and the brother of the violinist and composer Hubert Ries. He received piano lessons from his father, he was instructed by the Bernhard Romberg also belonging to the Bonn Hofkapelle in cello playing. At the end of 1798 he went for further training in Arnsberg to meet an organist friend of his father; a year later he went to Munich. There he worked hard as a music copyist.

The French dissolved the Electoral court of Bonn and disbanded its orchestra, but in the early months of 1803 the penniless Ries managed to reach Vienna, with a letter of introduction written by the Munich-based composer Carl Cannabich on December 29, 1802. Ries was then the pupil of Ludwig van Beethoven, who had received some early instruction at Bonn from Ries's father, Franz Anton Ries. Together with Carl Czerny, Ries was the only pupil that Beethoven taught during these years. Beethoven took great care of the young man, teaching him piano, sending him to Al,brechtsberger for harmony and composition and securing for him positions as piano tutor in aristocratic households in Baden and Silesia. Ries was soon also Beethoven's secretary: he had correspondence with publishers, copied notes, completed errands and concerned Beethoven the beautiful apartment in the Pasqualati Haus where the composer lived for several years. Ries made ,his public debut as a pianist in July 1804, playing Beethoven's C minor concerto, Op. 37, with his own cadenza, which he was allo,wed to write. Ries received glowing reviews of his performance. Ries spent the summers of 1803 and 1804 with Beethoven in Baden bei Wien, as well as in Döbling.

Ries' work as a secretary and a copyist won Beethoven's confidence in negotiations with publishers and became a fast friend. One of the most famous stories told about Ries is connected with the first rehearsal of the Eroica Symphony, when Ries, during the performance, mistakenly believed that the horn player had come in too early and said so aloud, infuriating Beethoven.[a]

Ries feared conscription in the occupying French army (though he was blind in one eye) and so he fled Vienna in September 1805. He stayed in Bonn for a year with his family, and this is where he wrote his first piano concerto in C major, now known as Concerto no. 6 for piano and orchestra.[1] While Ries was living in Bonn, his two piano sonatas, op. 1, dedicated to Beethoven were published by Simrock. [2]

Starting in 1807 Ries spent the next two years in Paris before returning to Vienna. Here Ries quickly expanded his catalogue of works (mainly to Chamber and piano music, such as the later popular Septet op. 25). Ries was having great difficulty succeeding in the capital city of the French Army and was at times so discouraged that he wanted to give up the profession of music and seek a position in the civil service.

On August 27, 1808 Ries arrived back in Vienna, where he again made contact with Beethoven. Ries helped Beethoven with the premieres of the Fifth and Sixth Symphonies and other works for the benefit concert held on December 22, 1808. In July 1809, Ries left Vienna for the second time; this time he was threatened by the call-up to the Austrian military, which mobilized all forces against the threat of Vienna by Napoleon. Again he took refuge in his paternal Bonn and spent the next one and a half years composing a series of larger works: his first Symphony, his second Piano Concerto in C minor (later known as Concerto no. 4 op. 115) and his Violin Concerto (unpublished during his lifetime) in E minor op. 24.

In January 1811, he left for Russia with the goal of an extended concert trip via Kassel, Hamburg, Copenhagen, Stockholm to St. Petersburg. There, he met his old teacher Bernhard Romberg, with whom he played concerts in Western Russia. He composed two piano concertos for this tour, No. 2 in E flat major, op. 42 and No. 3 in C sharp minor, op. 55. However, in the summer of 1812, the French and Napoleonic military unexpectedly advanced on Moscow. Ries left Russia and toured across Europe, landing in London in 1813.

Ries spent the next eleven years in London. Johann Peter Salomon, the great friend and patron of Haydn— who had formerly played with Franz Anton Ries in the court orchestra at Bonn—included Ries regularly in his Philharmonic concert series,[b] where a review praised his "romantic wildness".

Ries arrived in London in April 1813, and in turn an old acquaintance of his father and former member of the electoral Cologne court Chapel could be useful to him: Johann Peter Salomon, had been his father's violin teacher and stayed since 1781 in the British capital. He had brought Joseph Haydn to London twice in the 1790s and in 1813 to the founders of the London Philharmonic Society. Now, he introduced Ries in the musical circles of London. Ries had established himself as a respected piano teacher in the wealthy districts of the city. In 1814, he married Harriet Mangeon (1796-1863), from an opulent family. In 1815 Ries became a member of the Philharmonic Society and in the same year elected to be one of its directors. Ries never lost touch with Beethoven and had a role in the London publications of many works of Beethoven after the peace of 1815, including the 1822 commission from the Philharmonic Society that resulted in the Choral Symphony. Ries wrote his Symphony No. 2 in D minor (Numbered as Symphony no. 5), inspired by the quality of the Orchestra of the Philharmonic Society, Ries's own compositional work is effectively split in two at this time. Ries composed most of his orchestral works during his time in London: six of his eight symphonies (as well as two of his five concert overtures) were created for concerts of the Philharmonic Society. On the other hand, he wrote now increasingly light fare for the piano: fantasies, Rondos, variations, adapted Divertimentos and others, mostly about well-known Opera Arias or popular folk song melodies. the production of Chamber music (string quartets, violin sonatas) and intermediate piano music (sonatas) came almost to a standstill. After 1820 it came to disagreements with his fellow directors of the Philharmonic Society; Ries was of the opinion that his works were not adequately taken into account in the programming of concerts. In 1821, he resigned his position of Director and began to befriend continental Europe with the idea of a return. On May 3, 1824 he gave his farewell concert in London, which he dedicated a Piano Concerto (Concerto no. 7 in a minor for piano and orchestra op. 132)

In July 1824 Ries retired to Germany with his English wife and three children, but returned to musical life in Frankfurt am Main as composer and conductor. His reputation as an instrumental composer and bandleader had strengthened now in Central Europe. In 1834 he was appointed head of the city orchestra and Singakademie in Aachen, for whom he wrote two oratorios, Der Sieg des Glaubens (1829) and Die Könige in Israel (1837), both of which have been recorded. In addition, he was festival director of the Lower Rhenish Music Festival eight times — between 1824 and 1837. The first year he was the director of the festival he took the opportunity of performing Beethoven's 9th Symphony, Which was the German premier of this work. In Godesburg 1825/1826 Ries wrote five string quartets (op. 150, no. 1–2; op. 166, no. 1; WoO 34 and 36). String quartets were a genre that Ries had barely touched. For his entire time he was in London he only wrote three works of this genre.

Beginning in April 1827 the Ries family moved to Frankfurt am Main. In Frankfurt the existence of a renowned Opera House attracted him. Since 1826, he had had plans to write operas, which he brought to fruition in the years 1827/28. On 15 October 1828, his first opera, The Robber Bride, was premiered in Frankfurt with great success. To the direction of the Dublin Music Festival in 1831 he used a months stay in London, where he composed his second Opera, the sorceress. (published in Germany under the title Liska or the Witch by Gyllensteen) It was Premiered on August 4, 1831 at the London Royal Adelphi Theatre. His third opera was composed in 1834 'Die Nacht auf dem Libanon' WoO 51, which for many years remained unperformed. In 1832/33 Ries and his wife made a several-month journey through Italy for a concert tour (which would remain his last), which led to Venice, Milan, Rome and Naples. During the trip, Ries wrote his last Piano Concerto (in G minor op. 177), his last Piano Sonata (A flat major op. 176) and his last String Quartet (F minor WoO 48, during his lifetime, unpublished). In the summer of 1834, Ries was briefly Director of the Aachen Theatre Orchestra in conversation; but he rejected the offer. In winter 1836/37 Ries stopped in Paris; there, he composed his last work for Orchestra (the Overture dramatique L'apparition WoO 61) and briefely went to London, where he succeeded in the world premiere of his new Overture in a concert of the Philharmonic Society (March 13). Ries returned to Frankfurt and he accepted an offer in August 1837. Ries was not able to fulfill the offer since he died on January 13, 1838 after a short and unexpected illness. When Ries died, he was so forgotten that no leading music magazine wrote an obituary for him.

Ferdinand Ries is buried in the Tomb (No. 45) of the Klotz family in the Frankfurt Main cemetery.

Cecil Hill wrote a scholarly thematic catalog, listed below, of this composer's works: for each work he provided incipits (opening themes) for each movement, dedications, known early reviews, and known dates of composition.

While one of the few widely circulated recordings of Ries's music was for some time that of his third piano concerto, all of his symphonies, the other concertos, and a number of chamber works are now available on compact disc and his surviving music for piano and orchestra and chamber works are the focus of ongoing projects on various record labels as well.

Other Works for Voice

Other works for piano and orchestra

This article uses material from the article Ferdinand Ries from the free encyclopedia Wikipedia and it is licensed under the GNU Free Documentation License.