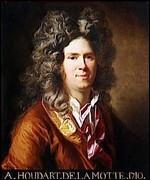 De la Motte was born and died in Paris. In 1693 his comedy, Les Originaux (Les originaux, ou, l'Italien), was a complete failure, and so depressed the author that he contemplated joining the Trappists. Four years later he began writing texts for operas and ballets, e.g. L'Europe galante (1697), and tragedies, one of which, Inès de Castro (1723), was an immense success at the Theâtre Français. He was a champion of the moderns in the revived controversy of the ancients and moderns. Anne Dacier had published (1699) a translation of the Iliad, and La Motte, who knew no Greek, made a translation (1714) in verse founded on her work.

He said of his own work: "I have taken the liberty to change what I thought disagreeable in it." He defended the moderns in the Discours sur Homère prefixed to his translation, and in his Réflexions sur la critique (1716). Apart from the merits of the controversy, it was conducted on La Motte's side with a wit and politeness which compared very favourably with his opponents' methods. He was elected to the Académie française in 1710, but soon afterwards went blind. La Motte carried on a correspondence with the duchesse du Maine, and was the friend of Fontenelle. He had the same freedom from prejudice and the same inquiring mind as the latter, and it is on the excellent prose in which his views are expressed that his reputation rests.

This article uses material from the article Antoine Houdar de la Motte from the free encyclopedia Wikipedia and it is licensed under the GNU Free Documentation License.

Rudolf Moser Kleine Suite für Streichorchester
Update Required To play the media you will need to either update your browser to a recent version or update your Flash plugin.