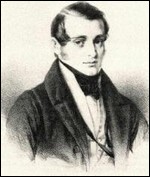 born on 8/2/1810 in Düsseldorf, Nordrhein-Westfalen, Germany

Burgmüller was born in Düsseldorf, the youngest son in a musical family. His father, August Burgmüller, was the director of a theatre. His mother, Therese von Zandt, was a singer and piano teacher. He had two brothers, Franz and Friedrich. Friedrich was also a composer. After the death of their father, the family had financial troubles. They were given support from Count Franz von Nesselrode-Ehreshoven.

Burgmüller studied with Joseph Kreutzer in Düsseldorf, and Louis Spohr and Spohr's pupil Moritz Hauptmann in Kassel. After his study he became their piano teacher. He became engaged to Sophia Roland, but in 1830 the relationship ended, to Norbert's distress. He became epileptic and began to drink excessively.

In the same year he returned to Düsseldorf to live with his mother. There he befriended Felix Mendelssohn. He became engaged to Josephine Collin, but this relationship ended too. After Mendelssohn left for Leipzig in 1835, Burgmüller made plans to leave for Paris, where his brother Friedrich had gone. In 1836 he went to a spa in Aachen, where he drowned during an epileptic seizure.

Robert Schumann, who arranged for the posthumous publication of Burgmüller's two symphonies, and completed the orchestration of the scherzo of the unfinished Symphony No. 2, wrote in a memorial notice that no death was more deplorable than that of Norbert Burgmüller since the early death of Franz Schubert.[1]

The opus numbers do not correspond with the order of composition.

This article uses material from the article Norbert Burgmüller from the free encyclopedia Wikipedia and it is licensed under the GNU Free Documentation License.

Giuseppe Tartini Violinkonzert D-Dur
Update Required To play the media you will need to either update your browser to a recent version or update your Flash plugin.