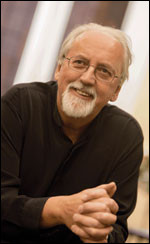 Jeffrey Skidmore OBE (born 27 February 1951) is the conductor and artistic director of Ex Cathedra, a choir and early music ensemble based in Birmingham in the West Midlands, England. An active participant in musical education and a pioneer in researching and performing neglected choral works of the 16th to 18th centuries, he has worked with leading musicologists to prepare new performing editions of French and Italian music. In particular, his recordings of French and Latin American Baroque music with Ex Cathedra have won wide acclaim.

Jeffrey Skidmore was born in Birmingham, England, in 1951.[1] He also attended St. Heliers Road Sunday School in Northfield before 1962, when he went to Bournville Boys Technical School, later Bournville Grammar-Technical School for Boys.

Skidmore began conducting while still at school, and was only 18 years old when he founded the Ex Cathedra choir in Birmingham in 1969. After going to Bournville Boys Technical School, later Bournville Grammar-Technical School for Boys, he went on to read music with David Wulstan at Magdalen College, Oxford, where he was a choral scholar under Bernard Rose.[2] He then taught as a music school teacher in Birmingham.

Directing the Ex Cathedra choir and its associated Ex Cathedra Consort and Baroque Orchestra, Skidmore has appeared in concert series and festivals across the UK and abroad, and has made a number of highly acclaimed recordings. In addition, he regularly conducts other ensembles such as the BBC Singers, the City of Birmingham Symphony Orchestra and the Hanover Band. He has commissioned over thirty new works and conducted many world premières by well-established and new composers, including Sally Beamish, Fyfe Hutchins, Gabriel Jackson, John Joubert, James MacMillan, Alec Roth, Daryl Runswick, Peter Sculthorpe, Philip Sheppard, Peter Wiegold and Roderick Williams.

In the field of opera Skidmore worked with Marc Minkowski and David McVicar on the 2004 production of Eccles' Semele at the Théâtre des Champs-Élysées in Paris; and conducted Cavalli's La Calisto, Purcell's Dido and Aeneas, and Rameau's Pigmalion at the Royal Birmingham Conservatoire. With Ex Cathedra he gave the first performances in modern times of the French Baroque operas Zaïde, reine de Grenade (Zaïde, Queen of Grenada) by Royer and Isis by Lully.[3][4]

Skidmore was appointed Officer of the Order of the British Empire (OBE) in the 2015 New Year Honours for services to choral music.[5][6]

Contributions to musicology and musical education

Skidmore is a pioneer in the field of research and performance of neglected choral works of the 16th to 18th centuries, and, in particular, has won wide acclaim for his recordings of French and Latin American Baroque music with Ex Cathedra for Hyperion Records. An honorary fellow at the Birmingham Conservatoire and a research fellow at the University of Birmingham, he has worked with many leading musicologists to prepare new performing editions of French, Italian and Spanish music by Giovanni Animuccia, Juan de Araujo, Marc-Antoine Charpentier, Michel Richard Delalande, Claudio Monteverdi and Jean-Philippe Rameau.[2]

Active in music education, Skidmore is Artistic Director of Early Music and the Capelle Baroque Orchestra of the Birmingham Conservatoire, and director of Ex Cathedra's wide-reaching education programme. He frequently gives choral training workshops and teaches at summer schools in the UK and overseas. He has regularly directed the choral programme at Dartington International Summer School and was Classical Music Programmer for the 2005 Kilkenny Arts Festival.[3][4][7]

This article uses material from the article Jeffrey Skidmore from the free encyclopedia Wikipedia and it is licensed under the GNU Free Documentation License.