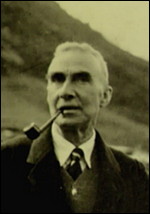 Cyril Bradley Rootham /rutm/[1] (5 October 1875 18 March 1938) was an English composer, educator and organist. His work at Cambridge University made him an influential figure in English music life. A Fellow of St John's College, where he was also organist, Rootham ran the Cambridge University Musical Society, whose innovative concert programming helped form English musical tastes of the time. One of his students was the younger composer Arthur Bliss, who valued his tuition in orchestration. Rootham's own compositions include two symphonies and several smaller orchestral pieces, an opera, chamber music, and many choral settings. Among his solo songs are some settings of verses by Siegfried Sassoon which were made in co-operation with the poet.

Rootham was born in Redland, Bristol to Daniel Wilberforce Rootham and Mary Rootham (née Gimblett Evans).[2] His father was a well-known singing teacher whose students included Eva Turner and Clara Butt, and he was also a director of the Bristol Madrigal Society.[3]

After attending Bristol Grammar School, Rootham initially entered St John's College, Cambridge, as a sizar in 1894 to study classics. Graduation in 1897 was followed by a second bachelor's degree, this time in music, which he completed in 1900. Rootham continued his musical education at the Royal College of Music where he studied under Marmaduke Barton, Walter Parratt, Hubert Parry and Charles Villiers Stanford, among others.[4][5]

Rootham's first professional appointment was as organist of Christ Church, Hampstead, where in 1898 he succeeded the composer Walford Davies.[4] This was followed by a brief period as organist at St Asaph Cathedral in north Wales in 1901. In the same year, Rootham was appointed organist at St John's College, Cambridge, a post he held until the end of his life.

In 1914 Rootham had become a Fellow of St John's after taking over the post of University Lecturer in Form and Analysis of Music. In 1924 he was made Senior Lecturer in Counterpoint and Harmony. Rootham was also a much appreciated teacher of orchestration. His many students included Arthur Bliss, Arnold Cooke, Christian Darnton, Armstrong Gibbs, Walter Leigh, Robin Orr, Bernard Stevens and Percy Young.[4][7]

As much as he promoted the works of other composers, Rootham did relatively little to push his own compositions into the repertoire. He conducted the first performance of his opera The Two Sisters in 1922 and three years earlier his own setting of Laurence Binyon's For the Fallen (which sparked a controversy as Elgar's setting of the same poem was published shortly after Rootham's, though neither composer was individually responsible for starting the dispute). Rootham's continued involvement with the CUMS included a performance of Handel's Semele and the revival of the tradition of triennial performances of Greek plays with newly composed music, a tradition which continued even after his death.

Rootham died in 1938, aged sixty-two, while still at the height of his creative powers.

Despite his many activities outside composition, Rootham was able to produce a musical catalogue that included including an opera, two symphonies, several smaller orchestral pieces, chamber music and various choral works.

Rootham regarded music with the utmost seriousness but never considered it a luxury to be confined to certain people. This might explain why he never completely broke with tradition; his music has a slight influence from Stanford and especially Parry. A presence of modalism can be found in much of his music as well as, in the later works, harmonic parallelism and bitonality. His harmonies with their unexpected twists and bitonalities, could be criticised for a lack of spontaneity and he is sometimes in danger of repeating himself but if this is the case then Rootham's masterly handling of the orchestra, of which sir Arthur Bliss praised Rootham as a brilliant teacher, certainly makes up for any constructional shortcomings. Favourite teaching examples included Mozart and Rimsky-Korsakov, and there is indeed a Russian love of primary colours in some of Rootham's work.

Elsewhere the influence from Kodaly can be detected, especially in the glittering orchestral textures in Rootham's Psalm of Adonis from 1931. Rootham's later works show inspiration from both Delius and Vaughan Williams (whose opera The Poisoned Kiss Rootham premiered), and bear evidence of a progression in his music. Though he acknowledged the English folksong revival he never directly involved himself in the movement, and he avoided many of the musical clichés identified by Constant Lambert in "Music Ho!". Nevertheless, the subject matter of his opera, The Two Sisters, is based on a version of the well-known folk ballad "The Twa Sisters" and opens with an unaccompanied rendition of six verses instead of an overture.[8]

Henry Colles recognised Rootham's style as "vigorous and genial", reflecting his personality. The Symphony no. 1 in C minor epitomises this musical vigour, especially the first and last movements which Arthur Hutchings considers to contain Rootham's most characteristic music. Another Rootham trademark evident in the symphony is his almost vocal writing for brass. His refined string writing is showcased in the Rhapsody on the old English tune Lazarus.

Rootham was in his element when writing for chorus and voice. Rootham's first significant compositions were vocal. It has been said that Stanford, when Rootham studied under him at the RCM, once grunted: "You can write for voices, me boy". His talent at combining words and music in masterly choral settings led Colles to write: "The stimulus of words brings out the more delicate and poetic qualities and gives distinction to his music".The Stolen Child, Ode on the Morning of Christ's Nativity and City in the West (a poem by his son Jasper) are among his finest achievements.

This article uses material from the article Cyril Rootham from the free encyclopedia Wikipedia and it is licensed under the GNU Free Documentation License.