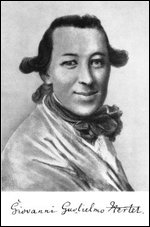 died on 14/6/1789 in Schwerin, Mecklenburg-Vorpommern, Germany

He was born in Eisenach, into a family of musicians. His father, Johann Christian Hertel (1697-1754) was Konzertmeister (from 1733) and director of music at the Eisenach court, while his grandfather, Jakob Christian Hertel (ca. 1667-ca. 1726), had been Kapellmeister in Oettingen and later Merseburg. At an early age Johann Wilhelm accompanied his father, an accomplished viol player, on tour at the harpsichord. He also learned the violin, which he studied with Franz Benda. In 1742 he came with his father to Mecklenburg-Strelitz where he was active playing both instruments. Among his pupils there was Carl Friedrich Christian Fasch (1736-1800). After further music studies in Zerbst and Berlin, Hertel moved to the Duchy of Mecklenburg-Schwerin, where he made a successful career, initially as principal and later becoming court composer, and likewise undertaking teaching. During the reign of Duke Christian Ludwig II, Hertel wrote primarily representative instrumental music, while during the reign of his successor, Frederick II (called 'the pious') he focused on sacred music. In 1770 he was appointed court counsellor and served also as private secretary to princess Ulrike. He died in Schwerin.

Hertel wrote a great number of symphonies, solo concertos, harpsichord sonatas, songs, hymns, cantatas and oratorios. He is considered an important representative of the 'emotional style' of the German pre-classic.

This article uses material from the article Johann Wilhelm Hertel from the free encyclopedia Wikipedia and it is licensed under the GNU Free Documentation License.

Hermann Schuncke 1.Satz aus der Sinfonie B-Dur op.6
Update Required To play the media you will need to either update your browser to a recent version or update your Flash plugin.