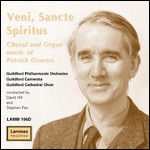 William Patrick Gowers (born 5 May 1936 in London) is an English composer mainly known for his film scores.

He taught composition part-time at Cambridge while completing his doctorate. He served as assistant conductor of Bill Russos London Jazz Orchestra. In the mid-60s he was music director of the Royal Shakespeare Companys Marat/Sade productions in the West End and in New York. Then he began scoring feature and documentary films.[1] In the 1970s, he directed the electronic music studio at Dartington[2] and played keyboards for the New Swingle Singers.[3]

Gowers started writing for television later in the 1970s. In 1982 he won the BAFTA original music award for his scores for Smileys People, The Woman in White and I Remember Nelson.[1]

Gowers is also noted for his choral music, including a setting of the text Veni Sancte Spiritus and the much-performed Viri Galilaei. He has also written a Cantata and several other anthems. He is also well known for his "Toccata" for organ, commissioned by Simon Preston and joined over a decade later by a fugue, as well as for his "Occasional Trumpet Voluntary".[1]

Patrick Gowers composed the music to The Adventures of, The Return of, the Casebook of and the Memoirs of Sherlock Holmes starring Jeremy Brett. The series ran from 1984 to 1994, and the soundtrack was released in 1987.

Amongst other TV series for which he composed the music are Thérese Raquin, I Remember Nelson, Smiley's People and Forever Green.

He is the great-grandson of the eminent neurologist Sir William Richard Gowers, grandson of civil servant and writer Sir Ernest Gowers and the father of the mathematician Sir Timothy Gowers, the writer Rebecca Gowers and the violinist Katharine Gowers.

This article uses material from the article Patrick Gowers from the free encyclopedia Wikipedia and it is licensed under the GNU Free Documentation License.