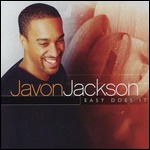 Javon Anthony Jackson (born June 16, 1965, Carthage, Missouri) is an American jazz tenor saxophonist. He played in Art Blakey's Jazz Messengers from 1987 until Blakey's death in 1990,[1] and has also played with the Harper Brothers, Benny Green, Freddie Hubbard and Elvin Jones.[2] In his solo career, his music has been a mix of hard bop with soul and funk influences.[3]

This article uses material from the article Javon Jackson from the free encyclopedia Wikipedia and it is licensed under the GNU Free Documentation License.