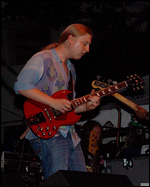 Derek Trucks is an American guitarist, songwriter and founder of the Grammy Award winning[1] The Derek Trucks Band. He became an official member of The Allman Brothers Band in 1999 and formed the Tedeschi Trucks Band in 2010 with his wife Susan Tedeschi. His musical style encompasses several genres and he has twice appeared on Rolling Stone's list of 100 Greatest Guitarists of All Time.

Trucks was born June 8, 1979, in Jacksonville, Florida. According to Trucks, the name of Eric Clapton's band, Derek and the Dominos, had "something to do with the name [Derek] if not the spelling.[2]

Trucks bought his first guitar at a yard sale for $5 at age nine and became a child prodigy who played his first paid performance at age 11.[3][4] Trucks began playing the guitar using a "slide" bar because it allowed him to play the guitar despite his small, young hands.[5] By his 13th birthday Trucks had played alongside Buddy Guy[6] and gone on tour with Thunderhawk.[4][7] After this tour, Derek was asked to fill in for The Press War, a gig he accepted gleefully and with somewhat ironic vigor.

Trucks formed The Derek Trucks Band in 1996, and[3][8] by his twentieth birthday he had played with such artists as Bob Dylan, Joe Walsh and Stephen Stills.[9] After performing with The Allman Brothers Band for several years as a guest musician, Trucks became a formal member in 1999 [3] and appeared on the albums Live at the Beacon Theatre and Hittin' the Note. In 2006 Trucks began a studio collaboration with Eric Clapton called The Road to Escondido and performed with three bands in 17 different countries that year.[3] Trucks was invited to perform at the 2007 Crossroads Guitar Festival and after the festival he toured as part of Clapton's band.[3][10]

His music is reported to encompass categories such as jam band, Southern rock and jazz [22] while simultaneously being rooted in the blues and rock genres.[23] Trucks plays an eclectic blend of blues, soul, jazz, rock, qawwali music (a genre of music from Pakistan and Eastern India), Latin music, and other kinds of world music[24] Trucks became a fan of Ali Akbar Khan and studied at the Ali Akbar College of Music in San Rafael.[25][26]

Trucks often plays the guitar in an open E tuning[27] using the Dunlop Blues Bottle slide.[10] In 2006, two vintage (1965 and 1968) Fender Super Reverb amplifiers, a Hammond B-3 organ, two Leslie speaker cabinets and a Hohner E-7 Clavinet were stolen from Trucks and later recovered by the Atlanta police department.[8]

Trucks has appeared twice in Rolling Stone's list of "The 100 Greatest Guitarists of All Time".[24][28][29] He was listed as 81st in 2003 and 16th in 2011. An article in the Wall Street Journal described him as "the most awe-inspiring electric slide guitar player performing today".[26] In 2007, Trucks appeared on the cover of Rolling Stone for an article called the "New Guitar Gods".[20] Trucks is reported to be a creative guitarist and according to his uncle, Allman Brothers drummer Butch Trucks, "He never does the same thing twice".[30]An article in The Washington Post described Trucks' guitar style as "notes and chords that soar, slice and glide, sounding like a cross between Duane Allman on a '61 Gibson Les Paul and John Coltrane on tenor sax".[31] The Derek Trucks Band's album Already Free debuted at No. 19 on the Billboard Top 200 Chart,[32] and No. 1 on the Internet chart, No. 4 on the Rock chart and No. 1 on the Blues chart.[11][32]

In 2010, The Derek Trucks Band won the Grammy Award for Best Contemporary Blues Album for the album Already Free. In 2012, Trucks and Tedeschi as the Tedeschi Trucks Band won the Grammy Award for Best Blues Album for the band's debut album Revelator.[33] On February 12, 2012, Trucks accepted a Grammy Lifetime Achievement Award along with ten other members of The Allman Brothers Band.[34][35] On February 21, Derek Trucks and his wife joined other blues musicians for a performance at the White House for President Obama and his guests.[36]

Trucks is an avid fan of the Atlanta Braves and his hometown Jacksonville Jaguars.[41]

With the Derek Trucks Band

With the Allman Brothers Band

With The Tedeschi Trucks Band

This article uses material from the article Derek Trucks from the free encyclopedia Wikipedia and it is licensed under the GNU Free Documentation License.