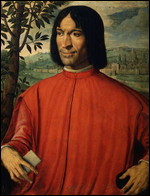 Lorenzo de' Medici (1 March 1449  9 April 1492) was an Italian statesman and de facto[1] ruler of the Florentine Republic during the Italian Renaissance. Known as Lorenzo the Magnificent (Lorenzo il Magnifico) by contemporary Florentines, he was a diplomat, politician and patron of scholars, artists, and poets. His life coincided with the high point of the early Italian Renaissance; his death marked the end of the Golden Age of Florence. The fragile peace he helped maintain between the various Italian states collapsed with his death. Lorenzo de' Medici is buried in the Medici Chapel in Florence.

Lorenzo's grandfather, Cosimo de' Medici, was the first member of the Medici family to combine running the Medici bank with leading the Republic. Cosimo, one of the wealthiest men in Europe, spent a very large portion of his fortune in government and philanthropy. He was a patron of the arts and funded public works. Lorenzo's father, Piero 'the Gouty' de' Medici, was also at the center of Florentine life, active as a patron and collector. His mother Lucrezia Tornabuoni was an amateur poet and friend to figures like Luigi Pulci and Agnolo Poliziano.

Lorenzo was considered the brightest of the five children, tutored by a diplomat, Gentile Becchi. He participated in jousting, hawking, hunting, and horse breeding for the palio, a horse race in Siena. His own horse was named Morello.

Piero sent Lorenzo on many important diplomatic missions when he was still a youth. These included trips to Rome to meet with the pope and other important religious and political figures.

Lorenzo, groomed for power, assumed a leading role in the state upon the death of his father in 1469, when Lorenzo was twenty. Lorenzo had little success in running the bank, and its assets contracted seriously during the course of his lifetime.

Lorenzo, like his grandfather, father and son ruled Florence indirectly, through surrogates in the city councils, through threats, payoffs, and strategic marriages  all the tools of despotism. Although Florence flourished under Lorenzo's rule, he effectively ruled as a despot and people had little political freedom.[2] It was inevitable that rival Florentine families should harbor resentments over the Medici's dominance, and enemies of the Medici remained a factor in Florentine life long after Lorenzo's passing.

On Easter Sunday, April 26, 1478, in an incident called the Pazzi Conspiracy, a group including members of the Pazzi family, backed by the Archbishop of Pisa and his patron Pope Sixtus IV, attacked Lorenzo and his brother and co-ruler Giuliano in the Cathedral of Florence. Lorenzo was stabbed but escaped; however the attackers managed to kill Giuliano. The conspiracy was brutally put down by such measures as the lynching of the Archbishop of Pisa and the death of most of the Pazzi family.

In the aftermath of the Pazzi Conspiracy and the punishment of Pope Sixtus IV's supporters, the Medici and Florence suffered from the wrath of the Vatican. The Papacy seized all the Medici assets Sixtus IV could find, excommunicated Lorenzo and the entire government of Florence, and ultimately put the entire Florentine city-state under interdict. When that had little effect, Sixtus IV formed a military alliance with King Ferdinand I of Naples, whose son, Alfonso, Duke of Calabria led an invasion of the Florentine Republic.

Lorenzo rallied the citizens. However, with little help being provided by the traditional Medici allies in Bologna and Milan (the latter being convulsed by power struggles among the Milanese ruling family, the Sforza), the war dragged on, and only diplomacy by Lorenzo, who personally traveled to Naples, ultimately resolved the crisis. This success enabled Lorenzo to secure constitutional changes within the Florentine Republic's government that only further enhanced his own power.

Thereafter, Lorenzo, like his grandfather Cosimo de' Medici, pursued a policy of maintaining both peace and a balance of power between the northern Italian states and of keeping the other major European states like France and the Holy Roman Empire's Habsburg rulers out of Italy. Lorenzo maintained good relations with Sultan Mehmed II of the Ottoman Empire, as the Florentine maritime trade with the Ottomans was a major source of wealth for the Medici.[3]

Lorenzo's court included artists such as Piero and Antonio del Pollaiuolo, Andrea del Verrocchio, Leonardo da Vinci, Sandro Botticelli, Domenico Ghirlandaio, and Michelangelo Buonarroti who were involved in the 15th century Renaissance. Although he did not commission many works himself, he helped them secure commissions from other patrons. Michelangelo lived with Lorenzo and his family for several years, dining at the family table and attending meetings of the Neo-Platonic Academy.

Lorenzo was an artist himself, writing poetry in his native Tuscan. In his poetry he celebrates life even whileparticularly in his later worksacknowledging with melancholy the fragility and instability of the human condition. Love, feasts and light dominate his verse.

Cosimo had started the collection of books which became the Medici Library (also called the Laurentian Library) and Lorenzo expanded it. Lorenzo's agents retrieved from the East large numbers of classical works, and he employed a large workshop to copy his books and disseminate their content across Europe. He supported the development of humanism through his circle of scholarly friends who studied Greek philosophers, and attempted to merge the ideas of Plato with Christianity; among this group were the philosophers Marsilio Ficino, Poliziano and Giovanni Pico della Mirandola.

During his tenure, several branches of the family bank collapsed because of bad loans, and, in later years, he got into financial difficulties and resorted to mis-appropriating trust and state funds.

Toward the end of Lorenzo's life, Florence came under the spell of Savonarola, who believed Christians had strayed too far into Greco-Roman culture. Lorenzo played a role in bringing Savonarola to Florence.

Lorenzo de' Medici died during the night of April 8/9, 1492, at the long-time family villa of Careggi (Florentine reckoning considers days to begin at sunset, so his death date is the 9th in that reckoning). Savonarola visited Lorenzo on his death bed. The rumor that Savonarola damned Lorenzo on his deathbed has been refuted by Roberto Ridolfi in his book, Vita di Girolamo Savonarola. Letters written by witnesses to Lorenzo's death report that he died a consoled man, on account of the blessing Savonarola gave him. As Lorenzo died, the tower of the church of Santa Reparata was allegedly struck by lightning. He and his brother Giuliano are buried in a chapel designed by Michelangelo, the New Sacristy; it is located adjacent to the north transept of the Church of San Lorenzo and is reached by passing through the main Capella di Medici; the chapel is ornamented with famous sculptures, and some of the original working drawings of Michelangelo can still be distinguished on two of the walls.

He died at the dawn of "The Age of Exploration"; Christopher Columbus would reach the "New World" only six months later. With his death, the center of the Italian Renaissance shifted from Florence to Rome, where it would remain for the next century and beyond.

Lorenzo married Clarice Orsini by proxy on February 7, 1469. She was a daughter of Giacomo Orsini, Lord of Monterotondo and Bracciano by his wife and cousin Maddalena Orsini. They had nine children:

His first son and his political heir, Piero 'the Unfortunate', squandered his father's patrimony and brought down his father's dynasty in Florence. Another Medici, his brother Giovanni, restored it, but it was only made wholly secure again on the accession of a distant relative from a branch line of the family, Cosimo I de' Medici.

This article uses material from the article Lorenzo de' Medici from the free encyclopedia Wikipedia and it is licensed under the GNU Free Documentation License.