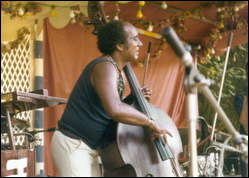 Walter Booker (December 17, 1933 – November 24, 2006) was an American jazz musician. A native of Prairie View, Texas, Booker was a reliable bass player and an underrated stylist. His playing was marked by voice-like inflections, glissandos and tremolo techniques.

Booker moved with his family to Washington, D.C. in the mid-1940s. He played clarinet and alto sax in college with a concert band. In 1959 he began on bass while in the US Army while serving in the same unit as Elvis Presley. He worked with Andrew White in Washington after his discharge, playing in the JFK Quintet during the early 1960s.

In 1964 Booker moved to New York City, being hired by Donald Byrd. After that, he recorded and toured with Ray Bryant, Betty Carter, Chick Corea, Stan Getz, Art Farmer, Milt Jackson, Thelonious Monk and Sonny Rollins, before joining the Cannonball Adderley Quintet in 1969, starting an association which lasted until Adderley's death in 1975. His next work was to tour the United States with the Shirley Horn Trio, along with Billy Hart on drums. During the same time, Booker designed, built, and ran the Boogie Woogie Studio in NYC, a mecca for musicians from all over the world, and through the 1980s, he played and recorded with Nat Adderley, Nick Brignola, Arnett Cobb, Richie Cole, John Hicks, Billy Higgins, Clifford Jordan, Pharoah Sanders, Sarah Vaughan, and Phil Woods.

Booker was married to the pianist Bertha Hope with whom he played in a trio that included drummer Jimmy Cobb. In addition to his own quintet, he also formed Elmollenium, based on the same core group as the Quintet (plus Bertha Hope) and dedicated to playing the music of Elmo Hope, who was previously married to his wife.

This article uses material from the article Walter Booker from the free encyclopedia Wikipedia and it is licensed under the GNU Free Documentation License.

François Devienne Rondo aus dem Flötenkonzert Nr.2 D-Dur
Update Required To play the media you will need to either update your browser to a recent version or update your Flash plugin.