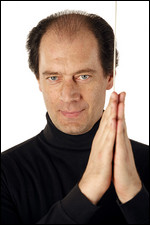 Christian Benda is a Czech cellist, composer and conductor, descended from the eighteenth-century Benda family of composers. He performs worldwide both as a soloist and a conductor.[1][2] His numerous recordings include many classical standards (notably, particularly distinguished performances of Boccherini cello sonatas, with his brother accompanying on the fortepiano, for the Naxos label) as well as the compositions of his ancestors Georg Anton (Jiří Antonín) Benda, František Benda and Jan Jiří Benda.[3] (Another ancestor of his was the conductor Hans von Benda, who was particularly active between the 1930s and the 1950s.) He serves as chief Conductor and artistic director of the Prague Sinfonia.[4]

He was a Climate Ally in the "Tck Tck Tck: Time for Climate Justice" campaign.[5]

This article uses material from the article Christian Benda from the free encyclopedia Wikipedia and it is licensed under the GNU Free Documentation License.

Saverio Mercadante Menuett aus "Decimino I"
Update Required To play the media you will need to either update your browser to a recent version or update your Flash plugin.