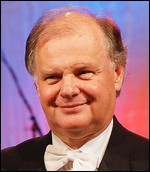 Béla Drahos (born 14 April 1955) is a Hungarian conductor and flautist.

Drahos started out as a flautist, joining the orchestra in his hometown when he was just 8 years old. At the age of 12 he became the principal flautist, and as a young man he won several flute competitions. He did not make his conducting debut until 1992 with an all-Beethoven programme. His first recording as a conductor was a disc of three Haydn symphonies for Naxos Records. He has also been soloist and conductor in a disc of Vivaldi flute concerti, as well as conducting flute concerti by Leopold Hofmann with another soloist. Moreover, he worked with the Hungarian composer Robert Gulya and the Austrian guitarist Johanna Beisteiner and published recordings with them for Gramy Records. He was conductor during the recording of the critically acclaimed soundtrack of Hitman 2: Silent Assassin and Hitman: Blood Money, composed by Jesper Kyd and performed by the Budapest Symphony Orchestra and Hungarian Radio Choir.

This article uses material from the article Béla Drahos from the free encyclopedia Wikipedia and it is licensed under the GNU Free Documentation License.