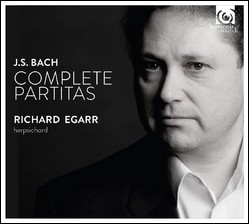 Richard Egarr is a British keyboard performer, on the harpsichord, fortepiano and modern piano, and conductor.

He received his musical training as a choirboy at York Minster, at Chetham's School of Music in Manchester, as organ scholar at Clare College, Cambridge and at the Guildhall School of Music & Drama. His study with Gustav Leonhardt further inspired his work in the field of historical performance.

Egarr has worked with all types of keyboards and performed repertoire ranging from fifteenth-century organ intabulations to Dussek and Chopin on early pianos, to Berg and Maxwell Davies on modern piano.

In 2006 he was appointed to succeed Christopher Hogwood as Music Director of the Academy of Ancient Music with effect from the start of the 2006–07 season (Hogwood assuming the title of Emeritus Director). For many years he was director of the Amsterdam-based Academy of the Begijnhof. A regular guest director with such other ensembles as Handel and Haydn Society and Tafelmusik, he plays with various non-period orchestras ranging from the Scottish, Swedish and Australian chamber orchestras to the Rotterdam Philharmonic, Berlin Konzerthausorchester, and Dallas Symphony Orchestra. He conducts a broad range of repertoire from Monteverdi to Mendelssohn. The Handel and Bach oratorios lie at the heart of his repertoire, and he has a growing reputation in the operatic field – plans include Mozart's La finta giardiniera with the Academy of Ancient Music at the Barbican Centre and the Théâtre des Champs-Élysées, and Rossini's Il signor Bruschino with the Netherlands Opera Academy.

He made his Glyndebourne debut in 2007 conducting a staged version of Bach's St Matthew Passion. Richard Egarr is in demand across Europe, Japan and the USA for his solo and concerto performances. In chamber music, Richard Egarr has also been active. For many years he formed an "unequalled duo for violin and keyboard" (Gramophone) with violinist Andrew Manze.

He records exclusively for Harmonia Mundi USA, with a discography of over 30 titles. His solo output comprises works by Frescobaldi, Gibbons, Couperin, Purcell, Froberger, Mozart, and J. S. Bach (Goldberg Variations and The Well-Tempered Clavier). He has an impressive list of award-winning recordings with Andrew Manze, including sonatas by Bach, Biber, Rebel, Pandolfi, Corelli, Handel, Mozart, and Schubert. With the Academy of Ancient Music he has recorded J. S. Bach’s harpsichord concertos and Brandenburg Concertos. In the Handel year 2009 they completed a seven-CD series of Handel discs including the instrumental music Opp.1, 2 and 5, the Concerti grossi Op.3 (which won a Gramophone Award in 2007) and the Organ Concertos Op.4 (MIDEM Award and Edison Award 2009) and Op.7.

This article uses material from the article Richard Egarr from the free encyclopedia Wikipedia and it is licensed under the GNU Free Documentation License.