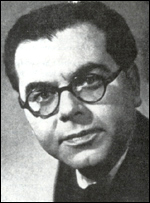 William Southcombe Lloyd Webber CBE (11 March 1914 – 29 October 1982) was an English organist and composer, achieving some fame as a part of the modern classical music movement yet commercially facing mixed opportunities. Besides his long and prestigious career, composing works ranging from choral pieces to instrumental items and more, he is known for being the father of both fellow composer Andrew Lloyd Webber and virtuoso cellist Julian Lloyd Webber. He also notably served as a teacher, instructing pupils on music theory at the Royal College of Music for a time.[1]

Webber was born in London. The son of William Charles Henry Webber, a self-employed plumber, he was fortunate that his father was a keen organ 'buff' who spent what little money he had travelling to hear various organs in and around the capital. Often he would take his son with him and, before long, young William started to play the organ himself and developed a keen interest that bordered on the obsessional.[2]

By the age of 14, William Lloyd Webber had already become a well-known organ recitalist, giving frequent performances at many important churches and cathedrals throughout Great Britain. He won an organ scholarship to the Mercers' School, later winning a further scholarship to study at the Royal College of Music, where he studied with Ralph Vaughan Williams and gained his FRCO diploma at nineteen. Because there was already another student at the college with the name William Webber, William continued to use his second middle name 'Lloyd' from then on as part of his name.

Parallel to his activities as an organist, he began to compose, and several interesting works date from this early period including the Fantasy Trio of 1936. Although the Second World War interrupted his composition (he was organist and choirmaster at All Saints, Margaret Street, London throughout the war) its ending marked the beginning of Webber's most prolific years as a composer.

In 1938, he was appointed organist and choirmaster of All Saints, later becoming Musical Director at Westminster Central Hall, London, the headquarters of the Methodist church in the United Kingdom. His first compositions developed in the 1930s. In 1942 he married the pianist and violinist Jean Hermione Johnstone (1921–1993).[3] The marriage, which lasted until his death, produced two sons: composer Andrew (born 1948) and cellist Julian (born 1951).

From 1945 until the mid-1950s, Webber composed vocal and instrumental music, choral and organ works, chamber music and orchestral works. Works from this period include the oratorio St. Francis of Assisi, the orchestral tone-poem Aurora, the Sonatinas for viola and flute, numerous songs, organ pieces and choral works. But Webber's roots were firmly embedded in the romanticism of such composers as Sergei Rachmaninov, Jean Sibelius and César Franck, and he became increasingly convinced that his own music was 'out of step' with the prevailing climate of the time. Rather than compromise his style, he turned to the academic side of British musical life - teaching at the Royal College of Music, directing the choir at Central Hall, Westminster, and, in 1964, accepting the Directorship of the London College of Music, a post which he held until his death in 1982.[2]

Disillusioned with composition, he wrote virtually nothing for the next 20 years - until shortly before his death, when a sudden flowering of creativity produced among a number of works the mass Missa Sanctae Mariae Magdalenae, (available on ASV CD, DCA961). In 1980 William Lloyd Webber was made a Commander of the Order of the British Empire for 'services to music'.

Webber was by nature a shy and withdrawn character. He had an avowed dislike of self-promotion and found the 'cut and thrust' approach apparently necessary for the furtherance of a composer's career to be complete anathema. He also had no time for the trappings of verbosity, and was a man averse to wasting words or, in his music, notes. He would ask his pupils, “Why write six pages, when six bars will do?"

Webber's music has recently enjoyed a resurgence and is heard increasingly in both live and recorded performances. When Aurora was recorded for Philips in 1986 by Lorin Maazel and the London Philharmonic Orchestra, Edward Greenfield of The Guardian called it "skillfully and sumptuously scored ... music as sensuous as any you will find from a British composer".

In 2005, Webber's The Divine Compassion was revived by the Aeolian Singers. This large scale choral work takes 95 minutes to perform and is based on the account of Passion of Christ in the Gospel of John.

A William Lloyd Webber Festival took place in the spring and summer of 2007 in London.

On 11 March 2014, a celebration of William Lloyd Webber's music and life took place at St Martin in the Fields, London, to mark the 100th anniversary of the composer's birth. The event was presented by Rowan Morton Gledhill and attended by family and friends of the composer's. Performers included the St. Martin's Voices directed by Andrew Earis, cellist Julian Lloyd Webber, organist Nicholas Wearne and pianist Rebeca Omordia. The programme consisted of both sacred and secular choral works - including the Missa Princeps Pacis and the part song 'The Moon', works for cello and piano, music for solo piano and the 'Benedictus' for organ and violin that William Lloyd Webber had composed for his wife and that was performed at their wedding service.

A performance of William Lloyd Webber's orchestral work 'Aurora', a tone poem, was scheduled to take place in the autumn of 2014 at the Royal College of Music, London.

This article uses material from the article William Lloyd Webber from the free encyclopedia Wikipedia and it is licensed under the GNU Free Documentation License.