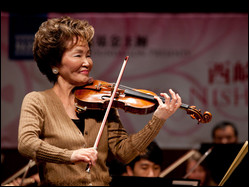 Takako Nishizaki (born April 14, 1944) is a Japanese violinist. She was the first student to complete the Suzuki Method course, at age nine.[1]

Nishizaki came to the United States from Japan in 1962. She first studied with Broadus Erle at Yale and then with Joseph Fuchs at Juilliard. [2] In 1964, she was a runner-up in the Leventritt Competition, in which Itzhak Perlman won first prize. [3] In 1966, she was awarded Juilliard's Fritz Kreisler Scholarship. [4] In 1969, she won first prize in the Juilliard Concerto Competition performing Mozarts Sinfonia Concertante with violist Nobuko Imai.

Some of Nishizaki's recordings with Slovak Philharmonic under Kenneth Jean by Naxos Records of famous violin concertos are highly ranked by The Penguin Guide to Recorded Classical Music. She has performed and recorded with pianists such as Andras Schiff, Jenö Jandó and Michael Ponti, and has performed in a number of chamber music ensembles.

Nishizaki is married to the Naxos label owner Klaus Heymann, and teaches violin in Hong Kong.[5]

Nishizaki's recording of Vivaldi's "Four Seasons" has sold over a million copies. [6]

This article uses material from the article Takako Nishizaki from the free encyclopedia Wikipedia and it is licensed under the GNU Free Documentation License.