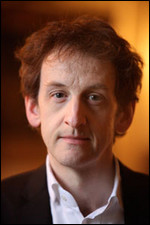 Stephen Farr is a British organist[1] currently Director of Music at Corpus Christi College, Cambridge.[2] He studied with Robert Munns and David Sanger in London and Cambridge. He also received tuition from Piet Kee in Haarlem and Hans Fagius in Copenhagen, and as a student was the recipient of grants from the Countess of Munster Musical Trust and the Worshipful Company of Musicians (W.T. Best Scholarship).

In 1984 he became Organ Scholar of Clare College, Cambridge, where he obtained a double first in Music and a Masters degree in Musicology. Sub-organist posts at Christ Church, Oxford and Winchester Cathedral preceded his appointment as Organist and Master of the Choristers of Guildford Cathedral, a post which he held from 1999 until 2007.

Stephen Farr now pursues an active freelance career, teaching in Oxford, directing the professional choir and general musical programme of St Paul's Church Knightsbridge in London, and performing as a soloist and ensemble player in the UK and abroad. He is also the Director of Chapel Music at Worcester College, Oxford. He won the Royal College of Organists Performer of the Year Competition in 1988 and further prizes at the international competitions in Odense, St Albans and Paisley.

He maintains a regular broadcast presence, and as a recitalist has featured in the main series of the major venues in the UK among them St Paul's Cathedral (where he has appeared twice in the Celebrity Series), Westminster Abbey, Westminster Cathedral, King's College, Cambridge, St David's Hall Cardiff, St John's, Smith Square, Symphony Hall, Birmingham, the Bridgewater Hall, the St David's Festival, and the Fairfield Halls. He has also appeared as a solo recitalist in the Cathedral of Notre Dame de Paris and the Laurenskerk Alkmaar.

His concerto work has included engagements with the Bournemouth Symphony Orchestra, Ulster Orchestra and the London Mozart Players; in 2005 he made his debut in the Amsterdam Concertgebouw with the Slovenian Radio Symphony Orchestra. He has also performed as a concerto soloist in Sydney Opera House with the Australian Baroque Orchestra. He works regularly with leading ensembles including Florilegium, the Bach Choir, BBC Singers, BBC Concert Orchestra, English Concert, London Baroque Soloists, Royal Philharmonic Orchestra, Wallace Collection, Endymion Ensemble the Orchestra of the Age of Enlightenment, Britten Sinfonia, the Academy of Ancient Music and Polyphony.

He has a particular commitment to contemporary music, and has been involved in premieres of works by composers as diverse as Patrick Gowers, Francis Pott, Judith Bingham, Thomas Hyde and Howard Goodall. He also collaborated with Thomas Adès in a recording for EMI of the composer's Under Hamelin Hill. In 2004 he commissioned a new organ symphony from David Briggs, inspired by Maurice Duruflé's setting of the Requiem mass. His recording of this work forms part of an extensive discography as soloist, accompanist and continuo player. In 2011, he planned to give the world premiere performances of 'The Everlasting Crown,' a major new solo work by Judith Bingham at the BBC Proms.

Farr is an examiner and trustee of the Royal College of Organists.

This article uses material from the article Stephen Farr from the free encyclopedia Wikipedia and it is licensed under the GNU Free Documentation License.