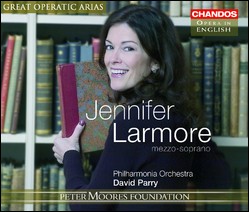 Jennifer Larmore (born June 21, 1958) is an American mezzo-soprano opera singer, particularly noted for her performances in coloratura and bel canto roles which she has performed in the world's major opera houses.[1]

Larmore was born in Atlanta, Georgia. She attended Westminster Choir College in New Jersey and trained with Robert McIver, John Bullock and Regina Resnik. She made her professional debut in 1986, at Opéra de Nice in Mozart's La clemenza di Tito. In 1988, she sang Rosina in Rossini's Il barbiere di Siviglia (Jérôme Savary production in Strasbourg). She made her Carnegie Hall debut as Romeo (Bellini's I Capuleti e i Montecchi) in 1994 and her Metropolitan Opera debut as Rosina in Il barbiere di Siviglia in 1995.[2] She went on to sing at the Met in La Cenerentola (Angelina), Hansel and Gretel (Hansel), Les Contes d'Hoffmann (Giulietta), Giulio Cesare (title role), L'italiana in Algeri (Isabella), Die Fledermaus (Prince Orlofsky), the world premiere of An American Tragedy (Elizabeth Griffiths), and Hamlet (Gertrude).[3]

In 2012, Larmore began adding dramatic soprano roles to her repertoire, singing Lady Macbeth in Verdi's Macbeth at the Grand Théâtre de Genève and Kostelnicka in Janáek's Jenufa at the Deutsche Oper Berlin. In 2013, she reprised the role Lady Macbeth for the celebrations of Verdi's bicentenary at the Teatro Comunale di Bologna and in Reggio Emilia. In 2013 she also starred in the world premiere of The Fall of Fukuyama, a new opera by Gregoire Hetzel and Camille de Toledo.[4]

Larmore has won the 1994 Richard Tucker Award,[5] a 1992 Gramophone award for Giulio Cesare on Harmonia Mundi in which she sang the title role,[6] and the 2007 Grammy Award for Best Opera Recording for Hansel and Gretel.[7] She sang at the 1996 Summer Olympics closing ceremony in Atlanta and hosted a satellite radio show for two years called Backstage with Jennifer Larmore. She received the Chevalier de l'Ordre des Arts et des Lettres from the French Government in 2002.[8]

This article uses material from the article Jennifer Larmore from the free encyclopedia Wikipedia and it is licensed under the GNU Free Documentation License.