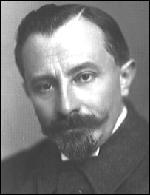 There are three autobiographies by Roslavets that differ considerably from one another. In one of them, published 1924, the composer deliberately misrepresented his biography[2] in order to prevent the attacks by the "Proletarian Musician" faction. There are differing accounts of Roslavets' birthplace, some indicating that he was born in Dushatyn[3] to a peasant family,[4] while he actually was born in 1881 into the family of a railway clerk, (of Ukrainian origin, according to Detlef Gojowy) posted in Konotop and Kursk, where Roslavets began to study violin, piano, theory of music and harmony in Arkady Abaza's musical classes.[5] In 1902 Roslavets was accepted as a student at the Moscow Conservatory where he studied violin under Jan Hímalý, free composition under Sergei Vasilenko, counterpoint, fugue and musical form under Mikhail Ippolitov-Ivanov and Alexander Ilyinsky. He graduated in 1912, with a silver medal for his cantata Heaven and Earth after Byron's verse drama.

In the 1910s Roslavets' compositions were published in Russian Futurist journals, and futurist artists designed some covers for his music. After 1917 the composer became one of the most prominent public figures of "leftist art" in Russia, together with Arthur Lourié, Kazimir Malevich, Vsevolod Meyerhold and others. Roslavets taught violin and composition in Elets, Kharkiv (then known as Kharkov, where he was director of the Musical Institute)[6] and Moscow. He had a position in the State Publishing House, edited the journal Muzykalnaya Kultura and was one of the leaders of the Association for Contemporary Music.

As a musicologist, Roslavets fought for professionalism, the best in Russian, Western classical and New Music; criticizing vulgar identifications of music with ideology (exemplified in his article On pseudo-proletarian music). He wrote the first Russian article about Arnold Schoenberg's Pierrot Lunaire.[7] This led to him being harshly attacked in the 1920s by the "proletarian musician" movement, especially by the representatives of the "RAPM" Russian Association of Proletarian Musicians and "Prokoll" (Production Collective of the Students at the Moscow Conservatory). Roslavets was accused of being a "counter-revolutionary" and "bourgeois" artist, "alien to the proletariat", as well as "formalist", a "class enemy" and in the late 1920s and early 1930s, a "Trotskyist", "saboteur"; etc.[8]

In 1928 Roslavets' cantata October was played in the concert in Moscow celebrating the 10th anniversary of the Revolution. In 1930 Roslavets was accused of being a "protector" of the Association of the Moscow Authors which according to the group "Proletarian Musician" was promoting "light music" and "spreading of the counter-revolutionary literature". The "Roslavets case" was led by Viktor Bely, Alexandr Davidenko, V. Klemens, Yuri Keldysh, Semion Korev, Zara Levina, Georgi Polyanovsky, Alexey Sergeev and Boris Shekhter. It resulted in a professional prohibition of employment. In 1930 Roslavets was banned from obtaining a position as a political editor for two years. In order to save his life, Roslavets had to publicly repent for his former "political mistakes".[9]

During 1932-33 he worked at the Musical Theater in Tashkent, now the capital of Uzbekistan. In 1933 the composer returned to Moscow, where he earned a meager living by teaching and taking occasional jobs. A victim of the political purges; Roslavets could get no official position for the remainder of his life. Roslavets was not admitted to the Composers' Union, instead he became a member of the Musical Fund. Punitive measures against him had been planned in 1938, and the former "proletarian musicians" had already spread disinformation about him; however Roslavets suffered a severe stroke in 1939 and was a disabled until his death following a second stroke in 1944.[10] His last publication, a song, appeared in 1942.[11]

He is buried in Vagan'kov cemetery in Moscow, and the authorities have now granted permission to mark his grave.[12]

While still a student, Roslavets had been engaged in vigorous artistic debates provoked by Russian Futurism, and was close to artists such as Kasimir Malevich, Aristarkh Lentulov, Vasily Kamensky, David Burlyuk and others. Deeply influenced by the later works of Alexander Scriabin and his mystic chord, Roslavets' quest for a personal language began not later than in 1907; it led to his propounding a "new system of sound organisation" based on "synthetic chords" that contain both the horizontal and vertical sound-material for a work (a concept close to that of Schoenberg's twelve-tone serialism). Following an article of Vyacheslav Karatygin, published in February 1915, Roslavets was sometimes referred to as "the Russian Schoenberg," but in 1914 Nikolay Myaskovsky had already stressed the original nature of Roslavets' style. In an article published in 1925 the critic Yevgeni Braudo pointed out that this was no more helpful than calling Schoenberg "the German Debussy." Although in the 1920s Roslavets criticized Scriabin because of his "oversimplification", the "new system of sound organisation" was first of all inspired by Scriabin's ideas and concepts as these were transmitted by Leonid Sabaneyev, a close friend of both Scriabin and Roslavets.[13]

Though the "new system of sound organisation" regulates the whole twelve-tone chromatic scale, most of Roslavets "synthetic chords" consist of six to nine tones. In the 1920s Roslavets developed his system, expanding it to encompass counterpoint, rhythm, and musical form while elaborating new principles of teaching. In Roslavets' earlier romances and chamber instrumental compositions those sets were already elaborated side by side with expanded tonality and free atonality. The mature forms of this "new system of sound organization" are typical for the pieces composed between 1913 and 1917, such as Sad Landscapes (1913), Three Compositions for Voice and Piano (1913), String Quartet No. 1 (1913), Four Compositions for Voice and Piano (191314), and the Piano Sonatas Nos. 1 (1914) and 2 (1916, reconstructed by Eduard Babasian), etc.[14]

After the Bolshevik revolution, Roslavets made an important contribution to the "revolutionary propaganda in music" in such compositions as the cantata October (1927) and numerous songs. However, his symphonic poem Komsomoliya (1928), demonstrates an extraordinary mastership, a very complex and highly modern compositional technique, far from the simplification typical for "propaganda works".[15]

In Tashkent, he turned for a while to working with folk material, producing among other works the first Uzbek ballet, Pakhta (Cotton). The works of his last years in Moscow show a simplification of his characteristic language to admit an expanded conception of tonality (for instance in the 24 Preludes for violin and piano), but are still highly professional.[16] Among Roslavets' later compositions, the Chamber symphony (193435) demonstrates one of the peaks of his "new system of sound organisation" in its later phase.

After Roslavets's death his apartment was ransacked by a group of former "Proletarian Musicians" who confiscated many manuscripts. Roslavets's widow succeeded in hiding many manuscripts; afterwards she handed them over to TsGALI (Central state archive for literature and art, Moscow; now called RGALI, or Russian state archive for literature and art). Some manuscripts were kept by Roslavets's pupil, P. Teplov; now they are in the State Central Glinka-Museum for Musical Culture.

In 1967 the composer's niece Efrosinya Roslavets undertook the first steps to rehabilitate her uncle. It has been found that the composer never submitted to the political repressive measures. This important step, that the refusal to play Roslavets's compositions was justified for the reason that Roslavets belonged "to the arrested peoples enemies," did not improve the situation; Roslavets's ouvre was suppressed. In 1967 the employee of the Glinka-Museum, Georgi Kirkor, refused Efrosinya Roslavets access to the museum's materials; Kirkor declared Nikolai Roslavets "to be alien to the people" and accused the composer of "relations with the world of Zionism".[17] This dangerous accusation was caused by the fact that Leonid Sabaneyev, a close friend of Roslavets, had promoted Jewish music; the ASM had also promoted Jewish composers.

For thirty years, Roslavets's name, expunged from the musical dictionaries, was hardly mentioned in Soviet musical literature. His name reappeared in a Soviet musical dictionary in 1978 in a negative context. Typical of the highly negative official attitude towards Roslavets were sentences like those: "Roslavets is our enemy," "he is a composer whose music is not worth the paper on which it is written down," "Roslavets's tomb should be destroyed."[18]

In the West, Detlef Gojowy (1934-2008) had been promoting Roslavets. For his activities Gojowy was constantly ideologically attacked on behalf of the officials of the Soviet Composers' Union, in particular personally by Tikhon Khrennikov, and the magazine "Soviet Music." Until 1989, Gojowy was treated as a "militant anti-communist" and a persona non grata. The copies of his articles which the journalist sent to his Soviet colleagues were confiscated by the Soviet customs; Gojowy himself was not allowed to get a Soviet visa.[19]

On December, 27th 1980 a concert took place place at Mark Milman's club for Chamber music; a section of this concert was devoted to Roslavets's music. According to Edison Denisov, the leaders of the Composers' Union of the Soviet Union banned a concert entirely devoted to the composer. After the first publication about Roslavets's original theoretical concept, based on archival materials (Lobanova 1983) had appeared, M. Lobanova's lecture on Roslavets's musical-theoretical system, declared in the program of the international conference "Musica nel nostro tempo" (Milan) was forbidden in 1984: leading functionaries of the Composers' Union of the Soviet Union had accused the researcher of "illegal contacts to the West." After that, dismissal by Lobanova from the Moscow conservatory was attempted as well as deprivation of her scientific degree and rights for teaching; soon, they tried to use an application of retaliatory psychiatry with the dissident diagnosis against Lobanova.[20]

For voice and piano:

This article uses material from the article Nikolai Roslavets from the free encyclopedia Wikipedia and it is licensed under the GNU Free Documentation License.